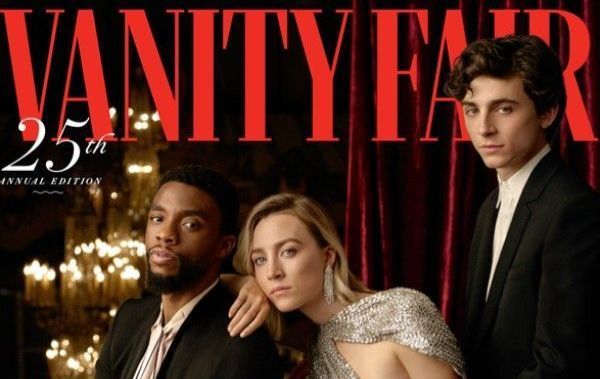 Saoirse Ronan highlights the Hollywood “of today and tomorrow”

The Irish American starlet, who most recently appeared in ‘Mary Queen of Scots’ alongside Margot Robbie, sits amongst Chadwick Boseman, Timothee Chalamet, Nicholas Hoult, Rami Malek, Regina King, and others on the special edition cover.

Saoirse Ronan on the cover of 'The Hollywood Issue (VanityFair, Twitter)

For their 2019 Hollywood Issue, Vanity Fair says they “teamed up with three-time Academy Award-winning cinematographer Emmanuel “Chivo” Lubezki to capture, in eloquent motion, the Hollywood of today and tomorrow.”

Ronan was amongst the actors chosen due to their  “unique Hollywood story that says much about where the business has been—and where it is going.”`

The results are a stunning array of ‘moving pictures’ featuring a diverse cast of players.

“It feels like a movie set,” said Timothée Chalamet at the 25th Vanity Fair Hollywood cover shoot—and he wasn’t wrong. With the help of Oscar-winning cinematographer Emmanuel “Chivo” Lubezki (@chivexp), we threw a two-day fête at the historic Los Angeles Theatre to rival the likes of Federico Fellini. Fortunately, @LandonNordeman was there to photograph all the behind-the-scenes magic, which you can see in full at the link in bio.

Saoirse, a three-time Oscar nominee, is featured in the issue as saying: “I hope that in the next 25 years of filmmaking cinema doesn’t end up completely disappearing and exist just on a laptop screen. I’d love it if we all went back to shooting film.”

“I hope that in the next 25 years of filmmaking cinema doesn’t end up completely disappearing and exist just on a laptop screen.” says Saoirse Ronan. “I’d love it if we all went back to shooting film.” See the entire 25th annual Hollywood Issue portfolio at the link in bio. Photograph by Emmanuel “Chivo” Lubezki (@chivexp). Styled by @SamiraNasr. Presented by @Genesis_USA.

Ronan is set to have a busy 2019. She’s teaming up again with Greta Gerwig, who directed Ronan in her Golden Globe-winning ‘Lady Bird’ performance, for a reboot of the classic ‘Little Women.’ She’ll also be co-starring with Oscar-winner Kate Winslet in ‘Ammonite.’

Check out Saoirse Ronan in this behind-the-scenes footage from the Vanity Fair 'The Hollywood Issue' shoot:

What's your favorite Saoirse Ronan performance? Let us know in the comments!