Conor McGregor showed up to take photos with fans in New York's Union Square this weekend, but there was something a little different about the Irish UFC champ... 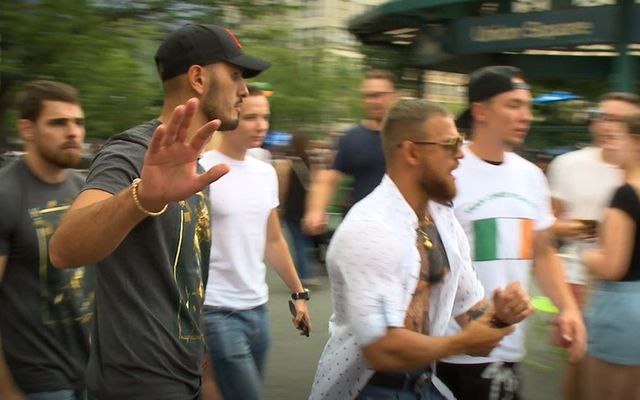 Conor McGregor made a surprise appearance in New York City's Union Square over the weekend, guarded by his loyal posse and posing for photos with star-struck fans.

Okay, so it wasn't actually McGregor himself, but a skilled impersonator who's so good that Colm Flynn, an Irish video journalist and TV presenter who was out shooting an unrelated piece for IrishCentral, was one of the only people to cop on to what was happening.

He stuck around to capture the excitement of fans who thought they were really in the presence of the real Irish UFC legend.

"He really should be training!" one onlooker said, referring to McGregor's hotly anticipated boxing match against Floyd Mayweather on August 26 in Las Vegas. "But I guess now he's here in New York, having a good time!" he added.

"That's Irish power, over there!" one especially hyped up fan exclaimed, saying that he thinks McGregor's intimidation game is strong and expressing huge admiration for how he "comes from nothing" and has made such a life for himself.

The McGregor impersonator departed with his crew. We're not sure what he'll be doing during the big fight on August 26, but maybe he'll be able to trick a few petrified fans into thinking McGregor is very late for the showdown.

Would you have been fooled by the Conor McGregor impersonator? Tell us in the comment section.