U2's Bono reveals in his upcoming memoir that he, his father, and his brother were "three Irish men" who tried to avoid the pain of his mother's death. 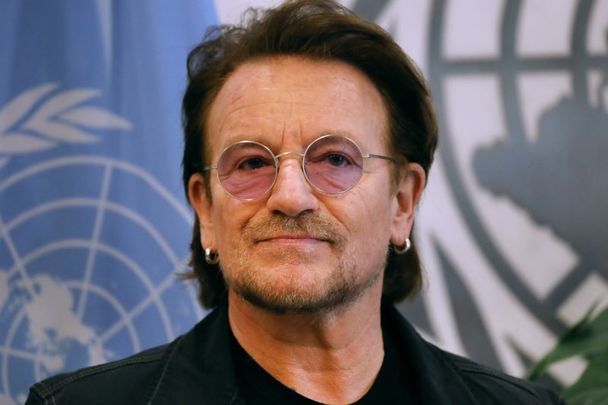 February 11, 2020: Bono meets with António Guterres, the Secretary-General of the United Nations (UN), in New York City. Bono was at the UN for the 'Drive for Five' initiative which seeks to highlight the importance of education for girls. Getty Images

We're going to find out much more about Bono with the November 1 release of his memoir "Surrender: 40 Songs, One Story."

The latest edition of The New Yorker published a chapter in which Bono writes movingly about his later mother Iris, who died when he was only 14.

After Iris Hewson passed suddenly of a stroke it was like she never existed, Bono writes. He and his father Bob, and elder brother Norman, never evoked her memory.

“I have very few memories of my mother, Iris. Neither does my older brother, Norman. The simple explanation is that, in our house, after she died she was never spoken of again,” Bono wrote.

“I fear it was worse than that. That we rarely thought of her again. We were three Irish men, and we avoided the pain that we knew would come from thinking and speaking about her.”

“I have very few memories of my mother,” Bono writes, in a new Personal History. “The simple explanation is that, in our house, after she died she was never spoken of again.” https://t.co/nUJ44fANYE

Iris suffered a brain aneurysm at the burial of her father and never recovered. Two of her sisters, Bono revealed, died of the same thing.

“At the funeral, I spot my father carrying my mother in his arms through a crowd, like a white snooker ball scattering a triangle of color. He’s rushing to get her to the hospital. She has collapsed at the side of the grave as her own father is being lowered into the ground,” Bono writes.

“Even though it’s Grandda’s funeral, and even though Iris has fainted, we’re kids, cousins, running around and laughing. Until Ruth, my mother’s younger sister, bursts through the door. ‘Iris is dying. She’s had a stroke.’

“Three days later Norman and I are brought into the hospital to say goodbye. She’s alive but barely. The local clergyman Sydney Laing, whose daughter I’m dating, is here. Ruth is outside the hospital room, wailing, with my father, whose eyes have less life in them than my mother’s. I enter the room at war with the universe, but Iris looks peaceful. It’s hard to figure that a large part of her has already left. We hold her hand.”

The chapter shows what Bono fans have known for decades – he’s a beautiful, impactful writer. His book will no doubt give us more of the same.