This acapella Irish dancing in Cleveland will give you chills 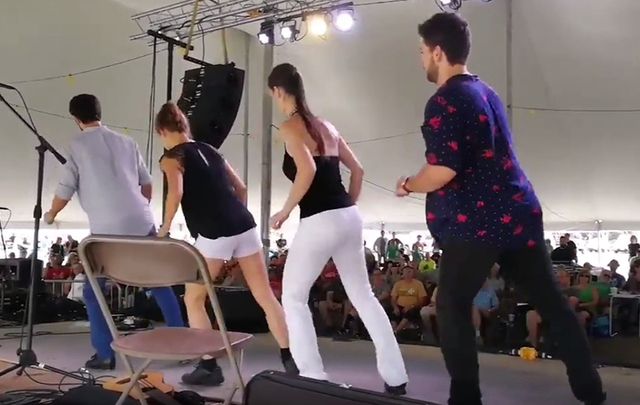 An Irish dancing group in Cleveland, Ohio wowed an audience with a performance that will make your spine tingle.

Tom, Kerry and Julie FitzGerald are siblings from a family of fiddle players and from Ontario's Ottawa Valley - a region steeped in the ancient traditions of fiddling and step dancing thanks to generations of emigration from Ireland, Scotland and France. They were joined on stage by Kyle Waymout a musician and dancer from Ottawa.

The group have performed before at the Cleveland Irish Festival and garnered fulsome praise.

Who's Coming to Cleveland Irish Fest July 22-24? #CICF #LiveMoreLifeBeMoreIrish So Glad you asked: The Fitzgerald's pic.twitter.com/BSTKxxXVyW

John O’Brien, the Director of the Cleveland Irish Festival, said of the family, “No group has generated as much curiosity, compelling our audience to return for a second set, as the Ottawa Valley style dancers that Julie Fitzgerald so excels at. The warmth, energy and enthusiasm has hooked generations from young to senior, then the talent lets loose - pure vibrant magic.”

Read more: Irish-flag-colored parrot is a better Irish dancer than you

The video was filmed by Mirella Murray from the acclaimed Cherish the Ladies - a Grammy-nominated Irish American dance group - take a look at her video and see for yourself!