The Mahers debut single "Lullaby for the World" caught the attention of the music mogul. 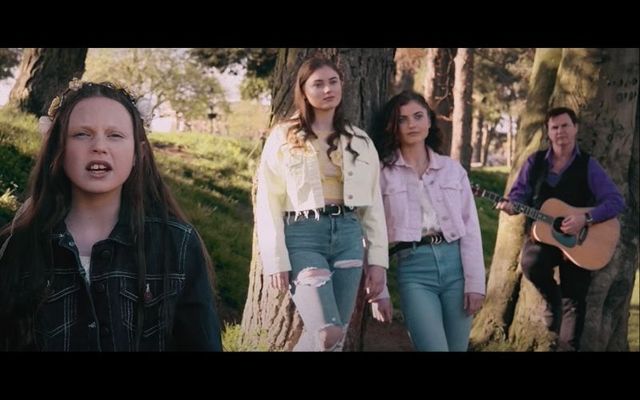 The Mahers in their debut single "Lullay for the World." The Mahers, YouTube

A County Kildare family is heading for the stars after being signed by Whitney Houston’s music manager.

The group is made up of the Mahers' dad Dave and his three daughters Ruby, Stacy, and Robyn. The music video for their debut single, Lullaby for the World, was released on YouTube in January 2021 and already has over 44,000 views.

The song, which focuses on the message of climate change, went to number two in the Irish download charts in the days after its release. It was also co-written by Brendan Graham, who previously had several Eurovision successes.

Speaking to the Leinster Leader, Dave said: “It is amazing, it really is. To get the chance to work with the likes of Whitney Houston’s manager, Rick Blaskey, is absolutely fantastic. He knows what he’s talking about as he has worked with, shaped, and guided the career of an artist who is arguably the best female vocalist ever.

"So having Rick in our corner, on top of having such a beautiful, thought proving, and relevant song is a dream for us."

The Irish singing family's new manager Rick Blaksey has big hopes for the family saying, “I always approached launching Whitney as so much more than just launching a new record and I have the exact same feeling with The Mahers.

"I have always been far more excited to work with artists who I believe transcend current genres and trends and who I can see have the widest possible appeal to the biggest audiences. The Mahers have genuine likeability, a unique persona, story and sound, and a global market to embrace them”.

Thankfully the Mahers are no strangers to the limelight. The youngest sister Ruby performed on the kid's version of The Voice UK in 2020, wowing the judges with her blind audition performance. The family has also featured on Irish national TV, being contestants on "Réalta agus Gaolta", a show that searches for Ireland’s most talented family.