The Irish language students from Coláiste Lurgan, in Galway, have done it again with their cover version of Adele’s “Hello” as Gaelige (in Irish). 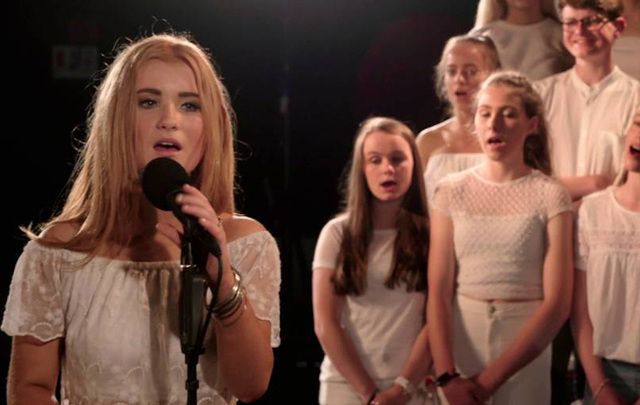 Irish language students from Coláiste Lurgan, in Galway, and their cover version of Adele’s “Hello” as Gaelige (in Irish).

Editor’s note: Seachtain na Gaeilge, celebrated from March 1 - 17, 2020, is an international Irish language festival and one of the biggest celebrations of our native language and culture that takes place each year in Ireland and in many other countries. IrishCentral, with offices in Dublin and New York, is delighted to celebrate it with them this year check out our Irish language stories here.

The video, featuring lead singer Shannon Bryan accompanied by a great cast of fellow students, has gone viral and garnered close to 1.8 million views since it was shared on YouTube in 2016.

Students attending the Gaeltacht school at Coláiste Lurgan have made brilliant covers of songs such as Avicii’s “Wake Me Up”, Sia’s “Chandelier”, Hozier’s “Someone New”, as well as tunes by Ed Sheeran and Wiz Khalifa.

These Irish language students are really grabbing the public’s attention, even more so after the roaring success of their 2016 TV show "Lurgan Beo", which has aired on TG4, the national Irish language TV channel. They have produced numerous cover songs since then, all of which can be found on their YouTube channel. Hardest working students in Ireland, this lot!

Is it just us or has the Gaeltacht changed since our day!

The lovely folks from Colaiste Lurgan even provided the lyrics to “Hello” as Gaelige in case you want to sing along.

Check out this fun video for their cover of “Cheerleader" by OMI, which has racked up 1,800k views:

Do you have an idea for a story on Irish music or the Irish language?  Why not join IrishCentral's contributor's platform IrishCentral Storytellers? You can learn more about it here and sign up here.