Critics have warned the White House that their immigration reforms contradict the meaning of the famous poem of the base of the Statue of Liberty. 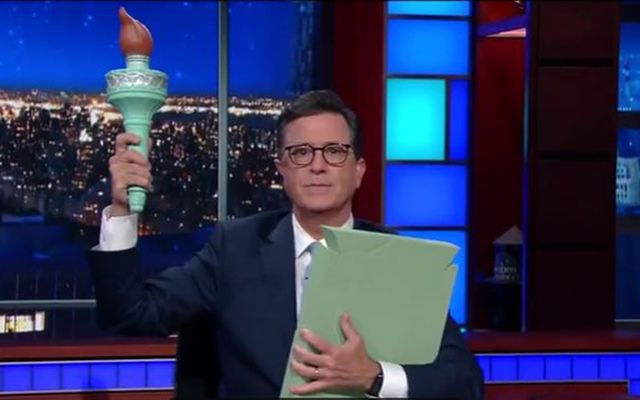 TV host Stephen Colbert claims President Trump does not endorse the message of the Statue of Liberty. YouTube

Stephen Colbert went on a rant about Donald Trump on his Late Show last night; the comic mocked that he had “never seen a presidential administration refuse to fully endorse the Statue of Liberty.”

The White House is under pressure to explain how the immigration reforms in the proposed RAISE Act are in keeping with the famous poem engraved at the base of the Statue of Liberty which urges the world, “Give me your tired, your poor, your huddled masses yearning to breathe free.”

The meaning of poem is usually taken as an ode to America’s view of herself as a Nation of Immigrants and a refuge for the dispossessed - something critics of the bill say it makes a mockery of.

The Irish-American comedian and late night host began by quipping that the White House’s new immigration proposals were, “kind of like weight watchers but the goal is to lose brown people.”

“And when a reporter asked Miller how this immigration plan lined up with the famous poem on the Statue of Liberty … Miller gave an astonishing revision of history,” Colbert said.

The show then cuts to a clip of Miller telling journalists that, “The poem that you are referring to was added later [after it was first built]. It’s not actually part of the original Statue of Liberty.”

“Listen,” Colbert adds sarcastically. “I don’t want to give you a whole history lesson but the poem was added later and distorted the meaning of the statue.

“The torch was intended as a weapon to ward off immigrants, who naturally fear fire, and the spikes on her crown were meant to deter foreigners from landing in hot air balloons - look it up!

“Now there’s a lot of crazy in his explanation there; first off I have never seen a Presidential administration refuse to fully endorse the Statue of Liberty.

“Here’s the thing about the poem on the Statue of Liberty, I agree with Stephen Miller that we’re never going to live up to it. It’s an aspirational document!

“Like ‘Love your neighbor as yourself’ or ‘All men are created equal’ or ‘Employees must wash hands before returning to work’.

“It’s something to strive for!... Just because we don’t make it, doesn’t mean it’s meaningless.

“But maybe he’s right, maybe we need to put a new poem on Statue of Liberty. So I’d like to give this a shot, okay here we are!”

Colbert then dived under his desk to retrieve a torch and a tablet.

“Give me your wealthy, your rich, your huddled M.B.A.s yearning to be tax-free,” he intoned.

“Send these the English-speaking, fully insured to me, I lift my lamp beside the golden door and lift my leg upon your filthy poor!

Whilst the skit was in jest there is at least one member of the Trump family who has always taken the poem on the Statue of Liberty seriously: the President’s sister, former Judge Maryanne Trump Barry, once cited it in an immigration case that she came before her.

Belfast man Malachy McAllister was set to be deported for his involvement with the Irish National Liberation Army (an offshoot of the IRA) during the Troubles.

Under the Bush Administration’s strict terrorist laws Judge Trump Barry was forced to order his deportation, something she deplored on the grounds that it was, “800 years of history that led Malachy to fight with his people to remove British rule and the persecution inflicted by that rule on Northern Ireland and on Malachy and his family."

"Congress's definition of 'terrorist activity," she declared, “sweeps in not only the big guy but also the little guy who poses no risk to anyone. It sweeps in Malachy McAllister [and] Malachy's children, Seán and Nicola, are swept in, too.

"If the deportation were to go ahead she told her courtroom, it would render Emma Lazarus's’ famous poem words meaningless, "I refuse to believe that 'Give me your tired, your poor, your huddled masses yearning to breathe free... ' is now an empty entreaty, but if it is, shame on us.”

"If the deportation were to go ahead she told her courtroom, it would render Emma Lazarus's’ famous poem words meaningless, "I refuse to believe that 'Give me your tired, your poor, your huddled masses yearning to breathe free... ' is now an empty entreaty, but if it is, shame on us.”