"F*** retiring!" Irish singer retracts her retirement the day after her Twitter announcement lashing out at interviewer for triggering her. 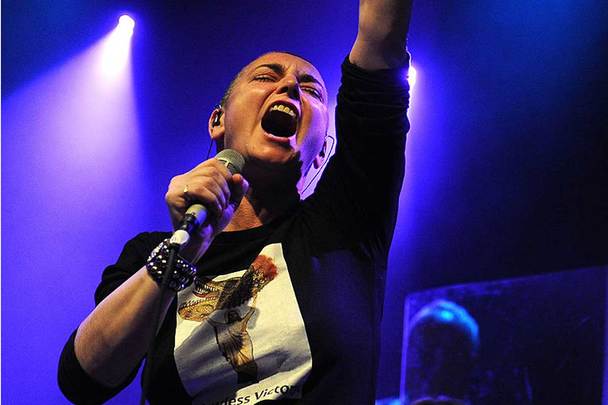 Sinead O'Connor has retracted her plan to retire. Getty

The Irish musician Sinead O'Connor has blamed an interview on BBC Radio 4's Woman's Hour on June 1 for her decision, announced on Twitter, that she was planning on pulling out of further press for her memoir, "Rememberings", and retiring from the movie industry.

O'Connor had appeared on the BBC radio show to promote her new book. During the interview, the presenter Emma Barnett asked O'Connor about having four children with four different men. She also referenced an article that had referred to the musician as "the crazy woman in pop’s attic."

On Monday, June 8, O'Connor released a statement blaming Barnett for her rash announcement.

She wrote "It was unnecessary and hurtful for Woman’s Hour of all people to remind me of the awfully abusive statement written about me by an Irish man for a UK paper some years ago, representing me as the Jane Eyre-esquires [sic] ‘madwoman in the attic'.

“Hardly surprising the same BBC who enabled and facilitated and then covered up Jimmy Saville, has cleverly employed female misogynists to control Woman’s Hour, so very clever.”

Good news. Fuck retiring. I retract. Am not retiring. I was temporarily allowing pigs in lipstick to fuck my head up... here's my statement..... in the form of these three photos. It's 'colourful' but that's me : ) #LetOConnorBeOConnor pic.twitter.com/wKoEKFANPk

O'Connor continued: “Barnett dares to suggest that ‘Oh, aren’t we much better now about discussing mental health’. No, Bitch. Because if we were you wouldn’t have dragged up the madwoman in the attic scenario. Of all the s**t you could have got off Google that was it? No questions about songs?

“I don’t really give a f*** if the psychopaths running the BBC listen to this or not. Or even if you, Emma, do. What matters more is I say it on behalf of all women who are legally vulnerable as a result of violent trauma. Or emotional and psychological abuse ... If things were in any way improving re: stigma, which is a murderer, you wouldn’t be presenting that show. Which should actually be renamed Pigs in Lipstick. Or Fuggin Female Misogynists.”

She added that during the promotion of her memoir she had been treated like a “Russian dancing bear”. She said numerous journalists in the UK, Ireland, and Canada had asked questions about traumatic incidents from her childhood. O'Connor asked that journalists not ask her questions that might "trigger" her.

June 7th: Irish singer-songwriter Sinead O'Connor has announced her retirement from the music business in a surprise tweet on Friday evening.

O'Connor took to Twitter to announce the end of her touring and recording careers, stating that her upcoming album "No Veteran Dies Alone" will be her final release.

"This is to announce my retirement from touring and from working in the record business. I've gotten older and I'm tired. So it's time for me to hang up my nipple tassels, having truly given my all," O'Connor wrote on Twitter.

This is to announce my retirement from touring and from working in the record business. I've gotten older and I'm tired. So it's time for me to hang up my nipple tassels, having truly given my all. NVDA in 2022 will be my last release. And there'll be no more touring or promo.

The 54-year-old singer said that she had no regrets over the decision.

"It's not sad news. It's staggeringly beautiful news. A wise warrior knows when he or she should retreat.

"It's been a forty year journey. Time to put the feet up and make other dreams come true."

O'Connor said that all shows which were originally scheduled for 2020 and later postponed until 2022 due to the COVID-19 pandemic have now been canceled.

O'Connor, who rose to international fame with hits such "Mandinka" and "Nothing Compares 2U", has just released her autobiography "Rememberings". The famous Irish singer said that the book empowered her to announce her retirement and "not wait for permission from the men".

She also tweeted that she is now available to be a judge on the Voice of Ireland.