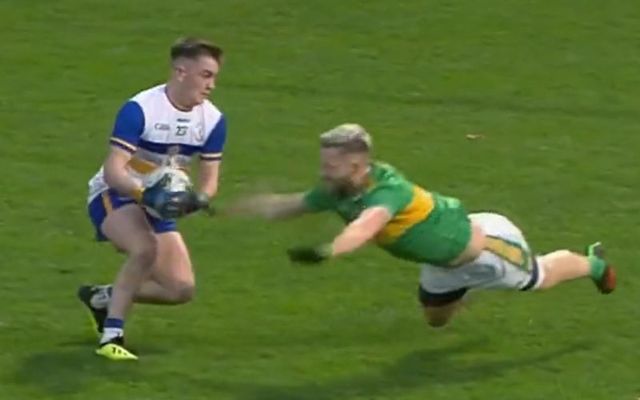 An incredible piece of skill in a GAA club match between Derry football champions Glen and Tyrone's Errigal Ciaran has gone viral on social media, with a number of US sports outlets sharing it on TikTok.

Ruairi Canavan, forward for Errigal, pulled off a remarkable dummy solo in the first half of an absorbing encounter that sent Glen defender Ryan Dougan hurtling head-first toward the ground.

Canavan, who is the son of legendary Tyrone forward Peter Canavan, then stroked the ball over the bar for a wonderful point from play.

A clip of the masterful play by Canavan was shared by Smaller Fish GAA on Twitter, racking up more than 21.2k likes.

Although the dummy left Dougan face-planted on the pitch, the Glen defender gave a good-natured response to the viral clip, replying that you "win some, lose some."

Glen ultimately prevailed with a final score of 3-10 to 1-12 over Errigal, but Canavan's piece of skill has proved to be the most memorable of a thrilling encounter.

The "cold-blooded" Canavan clip even made its way onto ESPN's TikTok page, but the US outlet lamentably hashtagged the footage with #rugby.

ESPN's TikTok was flooded with comments, with many people impressed with the level of skill in the GAA club match.

"Gaelic Football is one of the most slept on sports in the world," one person wrote. "Immense sport. Master craft here."

One Scottish fan remarked that he had never watched the sport before but conceded that the skill was "filthy."

Another international fan had sympathy for Dougan, remarking "that's someone's son, someone's brother, someone's friend... How you do him like that."

"Boy was so shook by the fade he didn’t even protect his face from hitting the ground," said another.