WATCH: Rod Stewart gets emotional after Ryan Tubridy gives him a special gift

Ryan Tubridy presented Rod Stewart with a very special gift during his appearance on The Late Late Show in Ireland. 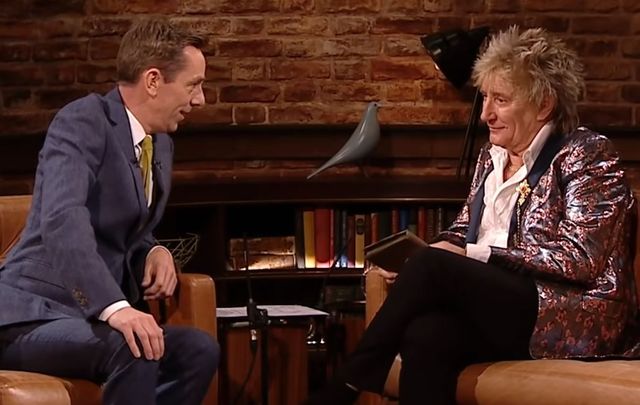 Rod Stewart broke down in tears after Ryan Tubridy presented him with a very special gift during The Late Late Show last week.

Read More: They banned one of Ireland's greatest ballad - what was the BBC thinking?

Stewart, who included a rendition of the Irish ballad ‘Grace’ on his latest album Blood Red Roses’, was featured on The Late Late Show to discuss his career in front of an audience of dedicated fans.

Stewart has previously said that the BBC wouldn’t play his version of ‘Grace’ due to the song’s “Irish, anti-English overtones.”

Stewart has been vocal about his interest in the tragic love story of Grace Gifford-Plunket and Joseph Mary Plunkett, who were married in Kilmainham Jail in Dublin just before Joseph was executed for his involvement in the 1916 Easter Rising.

While in Dublin last week ahead of his chat with Ryan Tubridy, Stewart even took the time to visit Grace’s grave at Glasnevin Cemetery.

As a sort of thanks for his interest, Ryan Tubridy presented Stewart with indeed a very special gift, a collection of poetry by 1916 leader Joseph Mary Plunkett, husband of Grace Gifford.

“Are you kidding me?!” says Stewart when presented with the gift.

Tubridy explains that the book of poetry was published in 1916 and is a first edition.

“Thank you so much,” says Stewart who is visibly teary-eyed.

“Thank you for keeping the story alive,” says Tubridy, “there may be some more inspiration for music in there.”

“It just means so much to me, because it was just f****** unfair the way the Irish were treated,” said Stewart.

Watching the touching exchange between Stewart and Tubridy here: