WATCH: A rousing rendition of The Rocky Road to Dublin in an Irish pub

"The Rocky Road to Dublin" performed by the male chamber choir The Ramparts at the Stag's Head Pub in Dublin, Ireland just before St. Patrick's Day 2020. 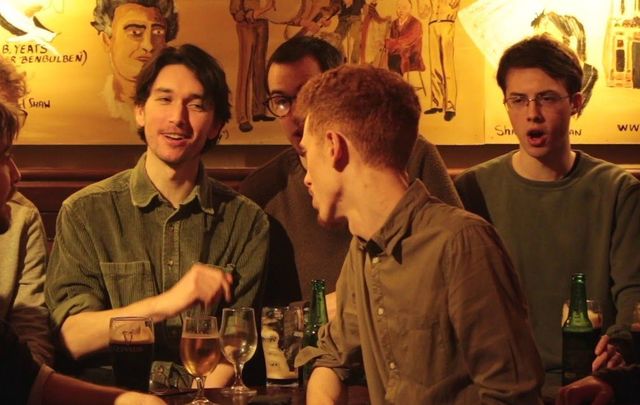 The Ramparts singing "The Rocky Road to Dublin" at The Stag's Head pub in Dublin, Ireland. Facbook

The Ramparts Chamber Choir recorded this top-notch version of "The Rocky Road to Dublin" back in 2020 and were kind enough to share the video with us here at IrishCentral.

The Ramparts are a male voice chamber choir who love to sing traditional Irish songs as well as folk, pop, and some "cheeky" barbershop. They were set up in early 2016 by choirmaster Ruaidhrí Ó Dálaigh who gathered his most cherished choral singers to create an acapella group with one dream, to perform epic Barbershop numbers to audiences around the world.

The setting for this recording? The famous Stag's Head pub in Dublin in March 2020, just before nationwide shutdowns went into place in Ireland.

On Facebook, The Ramparts said: "We’re really missing being out and about for St. Patrick’s Day this year but we understand how important it is for all of us to stay indoors!

"Here’s a video we shot in Stags Head Dublin two weeks ago - take a drop of the pure wherever you are and join us on The Rocky Road To Dublin 🍀."

'The Rocky Road To Dublin' - The Ramparts

if you're looking for a musical lift today, this is it! ☘️💚🇮🇪 Video: The Ramparts Chamber Choir Dublin

Rocky Road to Dublin - the story

Rocky Road to Dublin is a 19th-century Irish song about a man's experiences as he travels to Liverpool, in England, from his home in Tuam, in County Galway. The lyrics were written by D. K. Gavan, "The Galway Poet", for the English music hall performer Harry Clifton (1824–1872), who popularized the song.

The song describes the adventures, troubles, and travails the protagonist encounters on his travels. At the beginning of the song, the protagonist of the story states that he is "off to reap the corn", meaning he is off to seek his fortune.

He begins his journey by bidding farewell to his family and friends. He leaves his hometown of Tuam, County Galway on foot, and heads east, resting in Mullingar, County Westmeath, where he charms the local women with his "curious style", his Galway accent, and swagger.

He next arrives in the capital, Dublin, and decides to tour the city, but is robbed of his meager possessions. He attempts to locate the thief but is mocked for his Connacht accent ("Connacht brogue wasn't much in vogue").

He hops a ship in the harbor headed for England and is placed in the hold with the pigs, where he experiences severe seasickness off the coast of Holyhead, in Wales. He arrives in the English city of Liverpool where he is mocked by the locals because of his nationality.

Losing his temper, he engages them in a fight using his blackthorn shillelagh but is outnumbered until a group of Irishmen from Galway come to his rescue ("join in the affray"), the first people who have helped him on his trip.