It’s a bittersweet tale of love, loss, immigration and the beauty of America. 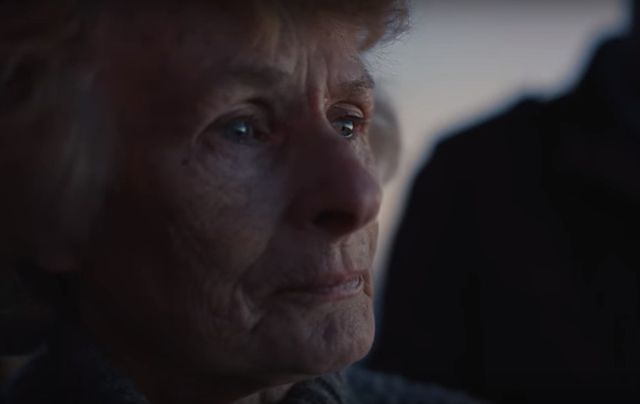 An Irish granny with little acting experience has hit the big time after being cast in a massive ad campaign for Volkswagen described as the most important new car launch ever for the company.

The Volkswagen brand was reeling after the public relations disaster when their fake emissions controls scandal became public. With their latest model, the Atlas, Volkswagen is hoping to win back American consumers.

Seventy-eight-year-old Marie Gallagher, an Irish immigrant based in Boston, plays the role of a widow whose husband has recently passed away. Before he died he had penned a letter to her asking her and their grand kids to fulfill his dying wish.

“My dear family,” she intones, reading the letter from her late husband.

“From the day I arrived I wanted to see this great country. My last wish is for you to do it for me as a family.

Set to the haunting music of Simon and Garfunkel’s ‘America’ the family load themselves into their Volkswagen and set off on a road trip across America, passing landscapes of breathtaking variety and beauty.

They slip past the skyscrapers of New York City into the rolling fields of America’s heartland; past the desert flats  of the south west, weave between snow-capped peaks before breaking at the West Coast – where California meets the sea – to scatter his ashes.

Gallagher said she was unprepared for the casting agents when they turned up at her home – she thought they wouldn’t be calling for another hour; the soda bread she was making for them was still in the oven and her hair was still dripping and in rollers.

"I thought I was going to be all dolled up, looking like a million dollars," she told Ad Age. But there was nothing she could do except tell herself, "Settle down, open the door, this is the way I am."

And whether her hair was perfectly curled or not, Volkswagen thought she was the perfect fit for a story about a quintessentially American journey and they cast her.

"Since this is a vehicle that is designed for American tastes we wanted to show it through the lens of America and really show America coast-to-coast," a spokesperson for Volkswagen said. "Human stories told simply is our tonality."

The importance of the Atlas launch is huge for Volkswagen, stung by a scandal that executives used hidden technology to fake pollution emission information. It is clear from the the company's commitment that the Atlas is one of the biggest campaigns ever.

Director Benito Montorio of production company MJZ decided early on that  an Irish American family was what he wanted. He ignored the usual L.A. casting calls and walked the streets of New York, New Jersey and Boston, visiting airports, churches and pubs in search of people to fill the roles of the Irish-American family he envisioned, said Heath Pochucha, Deutsch's group creative director for VW. He "basically filmed them and got to know them for hours at a time and then we'd look at these casting tapes," he said. "It was a really long arduous process."

Gallagher, who speaks with a strong Irish accent, found out about the casting through a friend who told her about a poster at an Irish cultural center in Boston. She has very little acting experience and her true passion is singing in Irish bars.

But she was perfect in other ways. She has owned five Volkswagens, including a red VW Bug, and she is a widow. Her husband passed away when he was  just 52-years-old.

When the casting directors dropped by one snowy day in January she showed them her VW pictures and sang an Irish ballad, "She Moved Through The Fair.” Later she met the director who asked for a final follow-up interview.

She got invited to the follow-up interview at a studio in Boston in front of director Montorio. "There were other grandmothers in there," she said. "That was the competition." After a final try-out in New York, she got a call a couple days later and was told, "Marie, pack your bag like you are going going on a three-week vacation, you are going to be doing the Volkswagen commercial," she said. "I was totally overwhelmed."

The 28-day shoot took her across America with her fictional family.

One day in a redwood forest in Northern California, the cast was kept waiting in a van as a driving rain kept them from shooting. "Being from Ireland, I was born in the rain," Gallagher said. "'Grandma is not sitting in this van, let me out,'" she recalled telling the crew, laughing. "It was pouring from the heavens and they are all saying, 'Grandma, get back in the car.'"

In the ad, she is seen looking at black-and-white photo of a couple. It's a real shot of Gallagher and her husband.

She is back in Boston now. She's already trading on her newfound fame. Recently she was an extra in the forthcoming Will Ferrell movie, "Daddy's Home 2."

But most of the time, Ad Age said, you'll find her in a Boston bar, belting out Irish tunes. "They just let me out of the home now," she usually tells the crowds, she recalled, laughing. "So I just have two songs tonight, and then I'm leaving."

Have you ever taken a road trip across Ireland or America? Tell us in the comment below!

Read more: Ed Sheeran’s Irish granny hears his song about her for the first time