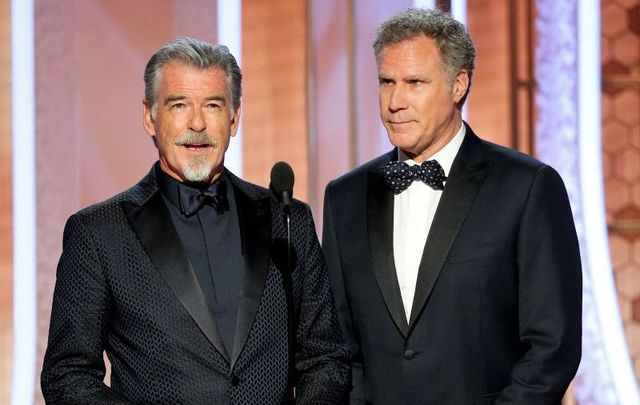 Pierce Brosnan is getting back to his comedy in the new Netflix movie “Eurovision Song Contest: The Story of Fire Saga,” which stars Will Ferrell and Rachel McAdams.

Netflix says: “When aspiring musicians Lars [Ferrell] and Sigrit [McAdams] are given the opportunity of a lifetime to represent their country at the world’s biggest song competition, they finally have a chance to prove that any dream worth having is a dream worth fighting for.”

In the film, Brosnan plays Ferrell’s character’s father. Earlier this month, the Irish actor told Ryan Tubridy on RTE’s ‘The Late Late Show:' "I do not sing in this new movie.

"It takes place in Iceland and Will and his girlfriend, they want to sing in the Eurovision Song Contest. I play Erick, the father, possibly 'the most handsome man in Iceland', as they say. And I'm a fisherman; I shun these kinds of foolish ways.

"As boyfriend and girlfriend, living in this little community in Iceland, they could be brother and sister - so they're never quite sure! I play his father, and I've gallivanted around! I think it's a wonderful film!"

In October, Brosnan shared some snaps on Instagram from Iceland, where he was on location filming the new comedy. He wrote on one post: “Days end filming in beautiful Húsavík, Iceland with Will Ferrell and Rachael Mc Adams. It was great to be part of the Eurovision family. Thank you Húsavík for your warm welcome.”

Days end filming in beautiful Húsavík, Iceland with Will Ferrell and Rachael Mc Adams. It was great to be part of the Eurovision family. Thank you Húsavík for your warm welcome.

While the new Netflix comedy is, of course, fictional, it’s based on the real-life Eurovision song contest that has been hosted annually since 1956, except for this year, when it was canceled due to the pandemic. The annual competition is where Riverdance debuted in 1994, launching Irish dancing into the mainstream.

Netflix has released a hilarious music video teaser for the film- check out ‘Volcano Man’ with Will Ferrell and Rachel McAdams here:

‘Eurovision Song Contest: The Story of Fire Saga’ premieres on US Netflix on June 26.