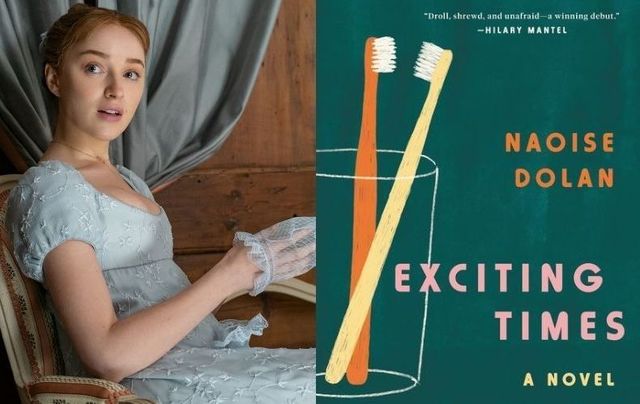 Dynevor “has closed a deal to executive produce and is attached to star in Exciting Times, a series in development at Amazon Studios that explores contemporary romance with a twist," Deadline reports.

Dolan’s novel, which became a Sunday Times bestseller and the winner of the Blackwells Debut of the Year and Waterstones Fiction Book of the Month, was the May 2021 selection for the IrishCentral Book Club.

Dynevor could be playing the lead role of Ava, described as “an Irish transplant abroad teaching English grammar to wealthy children, who becomes entangled in a love triangle with banker Julian and lawyer Edith,” in the screen adaptation of the Irish novel.

"Julian is a banker. A banker who likes to spend money on Ava, to have sex and discuss fluctuating currencies with her. But when she asks whether he loves her, he cannot say more than "I like you a great deal."

"Enter Edith. A Hong Kong–born lawyer, striking and ambitious, Edith takes Ava to the theater and leaves her tulips in the hallway. Ava wants to be her—and wants her.

"And then Julian writes to tell Ava he is coming back to Hong Kong... Should Ava return to the easy compatibility of her life with Julian or take a leap into the unknown with Edith?"

British actress Dynevor, 26, rose to fame over the last year for her starring role as Daphne Bridgerton in ‘Bridgerton.’ In the Netflix series, she was joined on screen by Galway actress Nicola Coughlan, who portrayed Penelope Featherington. Coughlan previously won herself a new fanbase after portraying Clare in the smash-hit series 'Derry Girls.'

Both 'Bridgerton' and 'Derry Girls' are set to film their highly-anticipated next seasons this year.