Cathy Maguire's rendition of "Our Lady of Knock" at St. Patrick's Cathedral in New York City. 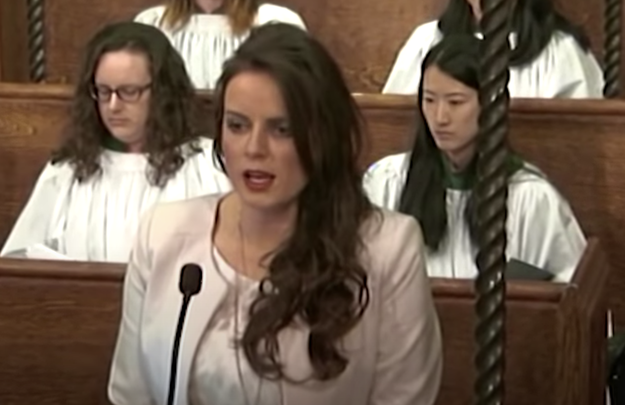 To celebrate the Feast of Our Lady of Knock on August 21, why not enjoy this wonderful rendition of the hymn "Our Lady of Knock" performed at the official New York City St. Patrick's Day Mass?

Cathy Maguire's stirring performance of "Our Lady of Knock" was a highlight for Cardinal Timothy Dolan St. Patrick's Day in 2017.

Professional singer Maguire, a native of Dundalk in Co Louth, sang out the lyrics to a packed St. Patrick's Cathedral and the Facebook reaction was immediate.

Maguire told IrishCentral the reaction to her performance was overwhelming and she looks forward to following up with the numerous appearance requests that have come her way since. This video has now had over one million views.

The feast of Our Lady of Knock celebrates the apparition of the Virgin Mary alongside St. Joseph, St. John the Evangelist, and the Lamb of God in the poor rural village of Knock, County Mayo, on August 21, 1879.

The apparition last two hours and resulted in Knock becoming one of the most sacred sites in Ireland.

The area is now an approved Catholic shrine and a place of pilgrimage, while it is one of the major Marian shrines in Europe.

Listen for yourself to a beautiful rendition of one of Ireland's most beautiful hymns.