Original Irish - Origin Theater's highlights and the bright road ahead

The Origin Theatre Company will mark its 15th year of operation in May with a gala celebration bringing stars of the stage and screen together under one roof. 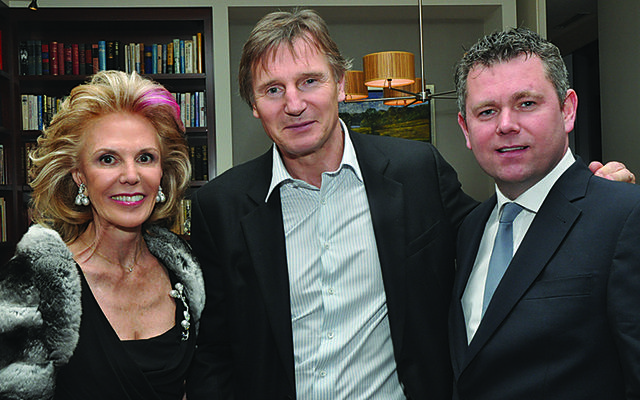 The Origin Theatre Company will mark its 15th year of operation in May with a gala celebration bringing stars of the stage and screen together under one roof. Artistic director George Heslin, who also helms the annual, groundbreaking 1st Irish Theatre Festival, talks to Cahir O'Doherty about some of the highlights to date and the path ahead for the most dynamic Irish (and European) theater company in America.

Not even W.B. Yeats and Lady Gregory achieved those levels of output in the heyday of the Abbey Theatre in Dublin.  So give credit where it’s due to artistic director George Heslin and his hardworking company, who have put contemporary Ireland and Europe on the American map year after year.

Since 2002 Origin Theatre Company’s mission has been to introduce European playwrights to American audiences.  Let’s recall that when they started out New York was still reeling from the shadows of 9/11. For two months that year all the Broadway houses were asked to work for free (and they immediately agreed to). Things were beyond rough.

It was a time when audiences were staying away from the city, fearful of what could happen to them, and so the decision to start a theater company in the midst of all that tumult would have seemed mad to many, including to Heslin himself.

Like a lot of companies, Origin grew out of an inspired theatre production.  “I was an Irish actor creating interesting work for myself,” Heslin tells the Irish Voice.

“First I appeared in the then unknown Enda Walsh’s Misterman.  After that I did a national tour with Marie Jones, Stones in His Pocket.  It was that journey across the states that got me thinking about creating an American platform for new European plays. I remember that I didn’t just want it to be Irish work.”

Having lived in London before he’d come to New York, Heslin saw a template for the future at celebrated theaters like the Royal Court, where good writing was at its core mission, regardless of where it came from. “I started observing that playwrights are drawn to theater companies because of the artists that work for them,” Heslin says.

Imagine a theater company that references the whole of Europe and that in the process creates a common European family? What could be more timely than that?

In Origin that dream has already come true. It’s the only theater company in New York that exclusively presents the work of European playwrights.

“We don't work with American playwrights, we’re quite strict about that in the mission statement. We’ve worked with directors from South Africa, Poland, Netherlands, Norway, Ireland, Spain and Italy. And that’s just our director pool,” Heslin says.

The thing that has excited Heslin the most is building a European community and helping new artists coming through the door in New York. That feels more vital now in this increasingly anti-immigrant era he says.

“It’s important to hear these European stories and to remember that we’re all immigrants, you know,” he says.

Heslin first came here in the late 1990s to work as an actor, and what astounds him most is been the tsunami of new Irish work for the stage since his arrival.

“I think the 1st Irish Theatre Festival has a huge responsibility for facilitating a lot of that,” he says, with justifiable candor.

“When I came here first there was so little opportunity for Irish actors. People forget that. I went to Trinity in Dublin and 50 percent of my class had come to New York. That was just one Irish school or college. There were a lot of actors on the ground here, but very little work.”

Origin came up with the concept of the 1st Irish Theatre Festival in 2008. The idea was to give a voice to the many but disparate Irish theater makers already living here. The American Ireland Fund and Mutual of America were crucial early supporters, as were the Northern Ireland Bureau, Tourism Ireland and Goldman Sachs.

In its first year they commissioned five Irish playwrights, directed them to ride a different subway line for a week, then come up with a play inspired by the experience which the festival would then cast, direct and stage.  It was a rip roaring success right out of the gate (as the Irish Voice testified in a series of rave reviews at the time). In its first year, 1st Irish presented the work of 13 Irish playwrights.

“Since then it’s been just amazing the amount of Irish actors who have passed through this company and the number of other Irish theater companies we have worked with like the Lyric, Fishamble, Kabosh, Wexford Arts Center,” Heslin says.

“We have built the gateway from Ireland to New York and people probably believe it’s a given that we will always exist when the truth is it now needs more financial support than ever.”

An Irish theater festival is not a competition between organizations. It’s an artistic coming together to celebrate Ireland and Irish theater. Over the years it took Origin and 1st Irish a while to build confidence so that others could say we can be part of this festival, we can be include in their programming, but they managed. The lesson was not lost on Heslin.

“We are competitive when we are united as a culture. We have seen this in our marketing even,” he says.

“We can do so much under the banner of an Irish theater festival. The Dublin Theatre Festival doesn't take away from the programming of all the other festivals in Ireland. Instead it shines a light on all of them, brings massive awareness and rallies them together to the benefit of all. We do the same.”

Another thing that Origin’s 1st Irish Festival has been is a marker toward exceptional new work, which continues after its month long run. The Irish Repertory Theatre has picked up four of its festival productions. Plays Origin was first to produce like The International by Tim Ruddy, Crackskull Row by Honor Molloy, For Love by Laoisa Sexton and two plays by Conal Creedon got picked up by top flight theaters (the Irish Rep subsequently produced the last four).

“The truth is that many Irish actors residing here get their main showcase once a year when the festival is in operation,” Heslin says.

So it’s time now for the wider Irish community here and for its political representatives to really step up to return the favor. “With a festival of this size – which is just one part of Origin’s annual programming – the challenges are marketing. We put a huge amount into that and we are competing all the time with much larger competitors,” Heslin says.

“Every year we put a panel of judges together to judge the work, and they more than anyone see the real scale of the work we do and the urgency of it. To attend the full festival is to have the penny drop about what it’s all about.”

The Irish government this year announced a new program that explicitly acknowledges the importance of Irish culture on the world stage. Called Creative Ireland, its brief is to amplify the work of Irish artists and culture makers nationally and globally.

“When you run an organization you are familiar with the cultural initiatives happening. Imagine Ireland was a wonderful idea that happened a few years ago for example,” Heslin says.

“While we were celebrating we have hoped there would be a legacy portion to the efforts. I think it’s important that funding from Creative Ireland will go to organizations that do the work on the ground here. We have very strong programming already; we don’t have to reinvent the wheel.”

Let’s support the work that’s already happening, Heslin says. And let’s hope this time there is a legacy commitment to support work over a five-year period.

“That’s the challenge for a lot of organizations. We hope that the funding will be for longer than one year so something can be built upon.”

Origin will celebrate its 15th anniversary on Monday, May 15. For venue and ticket information visit origintheatre.org.