Niall Horan invited US collegiate athlete Amy Bockerstette to play a round of golf with him at the Handa World Disability Invitational tournament in Co Antrim. 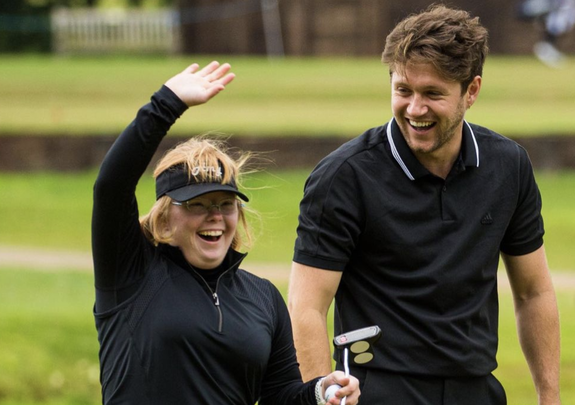 Niall Horan is so much more than a boyband star, as we saw yet again last week.

The sole Irish member of One Direction, a self-confessed golf addict who founded an agency called Modest! Golf that reps pros on tour, made one ace golfer’s dreams come true last week at the Handa World Disability Invitational tournament in County Antrim when he invited American collegiate star Amy Bockerstette to play a round with him at the event.

Amy, 22, isn’t just another athlete – she’s the first-ever American with Down Syndrome to receive a collegiate golf scholarship. She attends Phoenix's Paradise Valley Community College and is a standout, a Special Olympics athlete not only in golf but also in swimming and volleyball.

She’s also a big fan of Niall, and vice versa.  Niall first became aware of Amy in 2019 when he saw her in action at a PGA event in Arizona as a guest, and she made a nice par on the 16th hole. Niall shared a video of her triumph and she, of course, was thrilled and asked via Twitter if he’d ever like to play a round with her.

He replied in the affirmative, and that day finally came last week. Amy kicked off the event by taking the opening tee shot with Niall by her side, and a video call between the two before the tourney has attracted hundreds of thousands of views.

"He’s such a cool, sincere guy, Westmeath’s Niall Horan. He was so lovely to Amy and steadfast in his praise for her achievements.

“Amy! Oh my God, we finally get to meet, how are you? I'm so happy to be here with you, we've been trying to get this together for so long,” he said.

“We've been following your story for so long. We love you, you're so good for the game. And you're exactly what ISPS Handa is all about, breaking down barriers in the game. You are a real big inspiration to everyone. I was blown away by you.”

Niall and the tournament pitched in for the all-expenses-paid trip to Northern Ireland for Amy and her parents and judging from their social media posts they had a blast.

“I played (golf) today with my new best friend @NiallHoran ‼️ WOW‼️ It was the best time ever! And the fans cheered for me, too! How (cool) is that? I (love) it!” Amy informed her fan base via Twitter.

How wonderful for her! And no doubt Niall was equally enthused by their time on the course.