Check out Colm Meaney as Martin McGuinness and Timothy Spall as Ian Paisley. 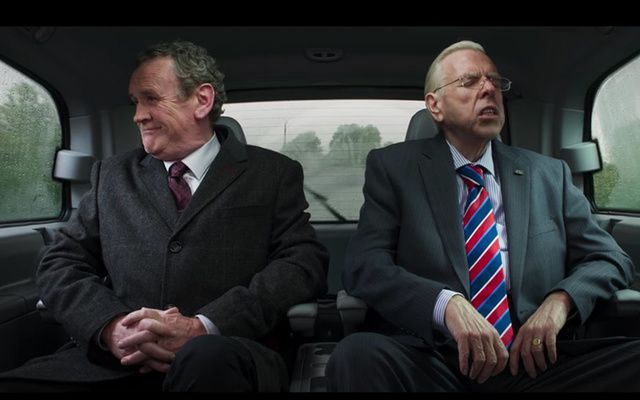 The relationship between Martin McGuinness and Ian Paisley fascinated all who took even a passing notice of what had transpired during 'the Troubles' when the two former adversaries came together in Northern Ireland's power-sharing executive. Now that pairing is the subject of a new movie, "The Journey," which is scheduled for release in June. A trailer for the long-awaited film was released this week.

The unlikely duo went from sworn enemies during the 30 years of war to partners in government. They got along so well that two were nicknamed 'the Chuckle Brothers' – a reference to characters from a British children’s TV program.

The script was written by northern novelist Colin Bateman. Bateman has not tried to portray real events in real time, but rather condense the burgeoning trust between the two through a fictional drama that captures the essence of Paisley and McGuinness' coming together. They have to thrash out a way to overcome centuries of division and a lingering sense of distrust between their two parties.

Their partnership surprised even the men themselves. “Up until March 26 this year Ian Paisley and I never had a conversation about anything – not even about the weather,” McGuinness informed President Bush on a visit to the White House later in 2007.

The production stars Timothy Spall and Colm Meaney as the unlikely partners.

Ian Paisley resigned in 2008 after only a year as First Minister and died in September 2014. Yes, despite the short time the hardline unionist and committed republican spent in government together, they remained in touch till the very end.

“It gave Ian a lot of happiness as well to know that he had left that impression with [him],” Baroness Paisley recalled. “His friendship with Martin McGuinness had meant something very special to him.”

"When Ian died Martin phoned me and asked if he could come to the house, which was strictly private.

“I told him he could come and I was pleased to see him at the house. He went in and stood over Ian’s coffin and was very moved at that time.”

McGuinness died earlier this month, but the Paisleys did not forget him in his final hours either.

"We were in contact up until a couple of weeks ago. I had sent him a message and then he had replied, but the last one I sent to him he didn’t reply to,” Eileen told the News Letter.

"I knew he was in intensive care so I didn’t really expect a reply, I just wanted him to get the message. I pray for him every day as I pray for an awful lot of people. I was thinking about him particularly yesterday morning [Monday]. I had a strange feeling about him. I just sent a message to say that we’re still remembering him and his wife and family in our prayers. And of course, then the news came through this morning [Tuesday].

“It’s very likely his mobile may have been switched off, but they know they have my sympathy.”