Can't make it to this year's Milwaukee Irish Fest? Tune into these live streams every day from Thursday, August 18 through Sunday, August 21! 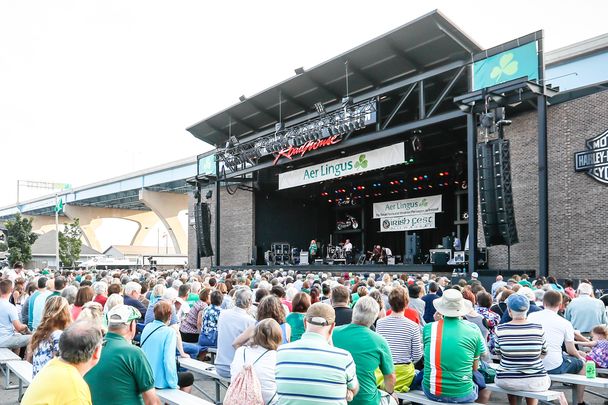 Milwaukee Irish Fest is kicking off its weekend of festivities on Thursday, August 18, and will be live streaming exciting performances each day from Thursday through Sunday.

IrishCentral is delighted to be partnering with our friends at Milwaukee Irish Fest to bring you the following live streams right here on IrishCentral and over on our IrishCentral Facebook page beginning Thursday, August 18, and wrapping up on Sunday, August 21.

Check out the schedule of the Milwaukee Irish Fest's live stream shows below and make sure to tune in!

From Scotland, the Red Hot Chili Pipers are bagpipers with attitude, drums with a Scottish accent, and a show so hot it carries its own health warning. The band's achievements have reached incredible heights with their groundbreaking fusion of traditional Scottish music and rock / pop anthems which they proudly call "bagrock."

Channelling the music of her ancestors, sixth-generation fearless fiddler, bilingual singer, multi-instrumentalist, and composer Clare Sands is a unique force in Irish music. Creating boundary-breaking Fearless Folk music inspired by her travels around Ireland and the world, Sands sings for the young and the old, brave and the bold. Sands has been wowing audiences around Ireland and further afield with her groundbreaking traditional style and infinite energy. These electrifying live performances see Clare on fiddle, guitar, percussion and vocals combined with live electronics to create soundscapes of story and song. Playing with the likes of Hothouse Flowers, her musical soul brothers, as well as Kíla, Imelda May, Mary Coughlan, and more, Clare is never shy and always fearless to share the stage.

There aren't many rhapsodic superlatives left in the box for Galway quartet We Banjo 3, whose virtuosic Irish/bluegrass/old-time mix attained freshly dizzying heights on their stupendous 2018 album Haven, which went on to become the first-ever Billboard Bluegrass #1 for an Irish act. One of the best live acts to come out of Ireland in recent years, the multi-award-winning We Banjo 3 combine supergroup credentials with a breath-taking command of the emotive power of fiddle, guitar, mandolin, and banjo. Any single member of this group could electrify a venue with a solo performance, but together, in the joyous musical alchemy of We Banjo 3, their passionate lead vocalist like a young Springsteen adopted by the Chieftans, the result is truly unforgettable. Simply put, the gold standard of Irish and American roots music.

Take two brothers, Daniel (Accordion) and Martin Gillespie (pipes, whistles and accordion), steeped in the Scottish west coast ceilidh tradition on the Isle of Tiree, and add in friends Fraser West (drums) and Alec Dalglish (guitar and vocals), with a background in brass bands, wind bands, jazz bands, and with blues, folk and country influences, and you have the 2005, embryonic Skerryvore. Fast forward 10 years, add Craig Espie (fiddle) and Jodie Bremaneson (bass), bring in your album producer Alan Scobie on Keyboards and mix in the Glasgow music scene, with the addition of Scott in 2019. Skerryvore represent the best in contemporary Scottish traditional music, with a growing fanbase worldwide and with the promise of much more to come.

Aoife Scott is an award-winning folk singer and songwriter based in Dublin, Ireland. Born into the legendary Black Family, Aoife is steadily rising to the top of the traditional and folk music scene, and has long enjoyed success as an established artist in her own right. Fragile and ethereal one minute and strong and vibrant the next, her dynamic and profound vocals explore the emotional depths of her lyrics, leaving the audience entranced. Aoife has a unique sound. Her music has a broad creative scope but is largely influenced by her own roots in folk and traditional Irish music.

Enda Reilly is a winner of the prestigious IMRO Christie Hennessy Songwriting Competition and co-writer of many songs with Aoife Scott including "All Along The Wild Atlantic Way", which got to number 1 in Ireland. From Dublin and now living in Michigan, Enda’s shows draw upon his self-produced albums, which include “Whisperings”, fresh guitar and vocal arrangements of classics including The Lakes Of Pontchartrain, Danny Boy, The Foggy Dew, Caledonia, and Red Is The Rose; “Amhráin Nua i nGaeilge - New Songs in Irish" his original contribution to keeping the Irish language alive; “Whorls” songs which bring the poetry of WB Yeats off the page and climatechangesongs.com which explores our interaction with the environment. Catch Enda at the Village Pub, the Gaeltacht, or the Song Circle with Aoife Scott.