An auction of Michael Flatley's personal items from his Castlehyde House estate in Co Cork was held recently. 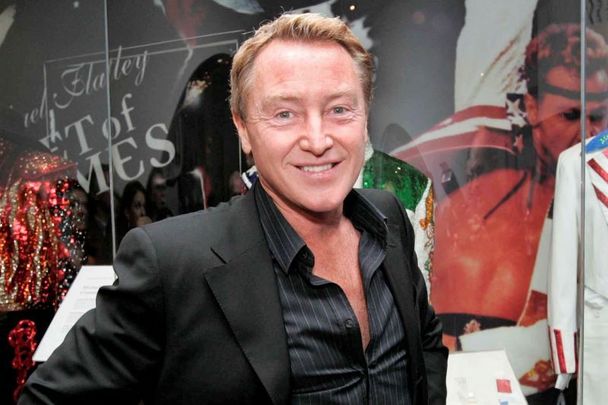 It was a profitable Thanksgiving weekend for Irish dance superstar Michael Flatley!

Editor's Note: This column first appeared in the December 2 edition of the Irish Voice newspaper, sister publication to IrishCentral.

The Lord of the Dance creator and star unloaded a bunch of stuff from his palatial Castlehyde House estate in Co Cork via auction, and a few of the items went for eye-popping prices, including a Hannibal Lecter face mask worn by Anthony Hopkins in the 2001 film Hannibal.

Flatley had the collectible framed and mounted on a poster for the movie which was signed by Hopkins and co-star Julianne Moore. Some movie buff ponied up more than £75,000 for the piece, the Daily Mail reports.

Another item of interest fetching a nice price was an original artwork created by Michael, who coated his dance shoes in paints and danced on a vinyl canvas. The unusual piece sold for more than £33,000.

“Flatley's selection of extremely ornate gilt and rococo furnishings were also on offer, including a plethora of couches, armchairs, and chaise lounges,” the Mail revealed.

“A heavy mahogany bar unit with a marble and brass top garnered some fierce bidding before the gavel went down at almost £7,300, well over the £4,500 estimate.  A pair of carved gilt settees sold for £1,500, a gilt chess set fetched nearly £900, and a pair of gilt tables with marble tops made £580.”

The auction of Michael Flatley's items – there were more than 600 of them – was handled by Sheppard’s Irish Auction House in Co Laois.

“It was quite an incredible section of items, with the Hannibal mask being the star attraction,” owner Philip Sheppard said.

No word yet on how much all the goods fetched in total, or what Michael’s plans are for Castlehyde, the stunning Irish manor he purchased more than 20 years ago when it was in total disrepair.  After years of painstaking renovations costing more than $20 million, Michael moved in and even hosted his 2006 wedding reception there. (Michael and his wife Niamh have a 13-year-old son, Michael Junior.)

Rumor has it that Michael is in the process of selling the waterfront 12-bedroom estate to a hotel company. He hasn’t confirmed or denied, so we’ll just have to wait and see.