Michael Fassbender’s "Alien: Covenant" is a thrill ride worth taking 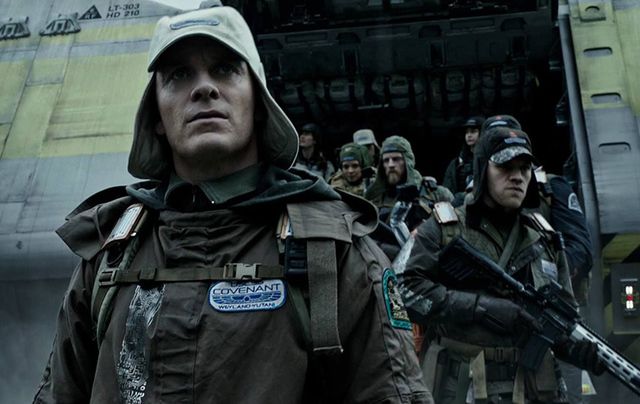 In "Alien: Covenant," Michael Fassbender returns as an android piloting a super spaceship filled with human colonists to a new planet in the far reaches of space. It’s the long awaited and more satisfying sequel to director Ridely Scott’s head-scratcher "Prometheus," only this time it’s a genuine thrill ride. Cahir O'Doherty catches one of the first unmissable blockbusters of the summer.

Irish robots, whenever someone finally invents them, are going to be some craic. That’s if Michael Fassbender’s turn as a sarcastic android in Alien: Covenant is anything to go by, and I really think it is.

In the new film, one of the biggest of the forthcoming summer blockbusters which opens on May 19, the just turned 40-years-old Kerryman plays Walter, a seriously droll robot who pilots the vast starship bringing a new batch of human colonists to a far away planet where the aliens aren’t friendly at all.

In casting Fassbender, one of the most accomplished leading men in film, director Ridley Scott brings some much-needed life to the now 38-year-old Alien franchise.  That’s because the gifted Irish actor steals every scene he’s in, including the scenes with himself (I’ll explain this part shortly).

Onscreen Fassbender nails the slightly too perfect to be real Walter, a synthetic human who is stronger, faster, brighter and more composed than any mere mortal, a task Fassbender pulls off with humor and panache.

We already know that every new Alien film will be jump out of your seat scary, but we don’t expect to laugh out loud too, which is what Fassbender makes the audience do time after time in this thrilling new installment.

In recent times the Irish actor has won plaudits and some rare pans for his screen work. Assassin’s Creed, Trespass Against Us and The Light Between Oceans failed to find significant critical or commercial success, but came after stellar turns in films like 12 Years a Slave, Hunger and Steve Jobs, for which he was nominated for a Best Actor Oscar last year.

In fact by December of 2016, a particularly cruel year for celebrities as well as everyone else, Fassbender had started to wonder if he’d taken on too much himself, with a slate of back to back movies that had run for almost a decade.

“It’s been pretty full-on,” he told TimeOut. “I had a ferocious appetite and energy for it, and I went at it like a maniac. But I’m going to take some downtime now. The last five years I was verging on being a workaholic. I’ve just been going from film to film.”

Can he see himself giving up acting at some point? “I can see it. I’m not ruling it out. I’m not saying it’s going to happen, but a part of me thinks you have a time as an actor when you’re at your best. There’s a journey to it, and then it’s downhill.”

Asking himself why he has worked as hard as he has for years is illuminating, he says. “Why have I attacked the work with such a frenzy? Maybe I wanted to leave a body of work behind? Maybe it’s because I worked for quite a while to get to this position. I don’t know.”

Alien: Covenant is a very welcome return to form for both director Scott and Fassbender himself, who is hypnotic and oddly hilarious in his dual roles. Spoiler alert: if you’re intending to stay spoiler free you may want to skip the next paragraphs.

Michael Fassbender as David in Alien.

As Walter the acerbic android that is an upgraded version of David (the flinty eyed character Fassbender played in Prometheus) the Irish actor plays dual roles, even appearing in some memorable scenes with himself.

Walter doesn't trust David with good reason: he’s mysterious, secretive and seems to have an agenda that he’s concealing. Nevertheless, the two doppelgangers interrogate each other and are quietly impressed and even infatuated by what they see.

The scene where David teaches Walter to play the flute is one of the best love scenes of the year, all the more surprising when you realize that both characters are played by the same Irish actor with distinctly different if identical looks.

Alien: Covenant clearly takes its biggest inspiration from Mary Shelley’s Gothic horror novel Frankenstein, and behind that from Greek mythology. David may look like a mild mannered scientist, but we slowly learn that he’s been quietly playing God with human and alien biological samples and that nothing good is going to come from his handiwork.

Who made the human race, the film asks? If robots have the technology to recreate themselves, doesn’t that mean that they’re superior life forms to the slower, less adaptable human beings that created them?

Alien: Covenant asks some pretty deep questions in other words, but unlike Prometheus it never forgets to scare the pants off you in a film that is two parts roller coaster to one part morality play.

After a disaster on board brings the space ship to an uncharted but life sustaining planet, the ship’s human captain Oram (Billy Crudup) decides to split the odds and make it their new colonial outpost.

His second in command is resistant to the idea though, sensing that the opportunity is just a little too perfect and that the distress beacon that led there might be a set up.

Scott’s money is on Daniels, the second in command (played by Katherine Waterson, most famous for last year’s Fantastic Beasts and Where to Find Them). She steps into the bad ass Sigourney Weaver-style role with authority from the opening scene.

No sooner have they put down a shuttle but they come under sustained and terrifying attack from a threat the likes of which they have never seen before.  Scott knows how to create an atmosphere of growing menace, and you’ll be on the edge of your seat as the tension builds.

One of the missing crew members from the previous journeys in this series is a good script editor. Plot holes you could drive trucks through and coincidences that were too good to be true let the air out of previous go-arounds, but that problem is resolved here.

From the opening moments and for the first time in decades, Alien: Covenant picks up the gauntlet thrown down by the classic series and contains some significant new shocks of its own.

Fassbender literally carries the film again as the two warring sides of a debate about who has the right to decide the fate of others.  David has weaponized an already fearsome alien race, and he believes that they represent the future.

But Walter doesn’t think he has the right to decide who should live or die, and he stands in his way. Who will win and who will lose is the troubling question that Alien: Covenant asks.

Along the way you’ll be riveted to your seat.