In "Trespass Against Us" a father and son duo head of a group of Irish Travellers encamped in the English countryside where they live a brutal but weirdly idyllic life on the edge of the law. 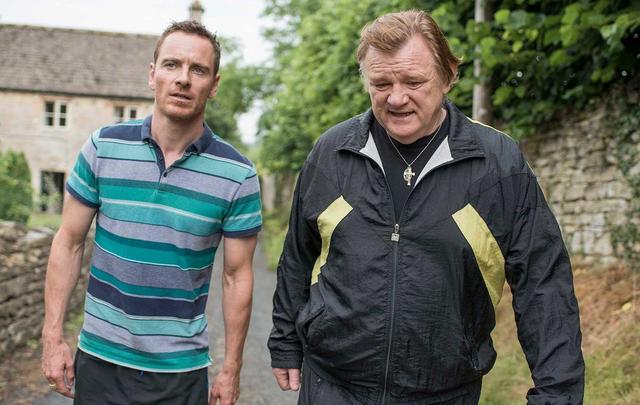 Michael Fassbender and Brendan Gleeson in Trespass Against Us.

In "Trespass Against Us," Michael Fassbender and Brendan Gleeson star as a father and son duo, heads of a group of Irish travelers encamped in the English countryside where they live a brutal but weirdly idyllic life on the edge of the law. Cahir O'Doherty checks out this oddball feature about a feuding family bound by lawlessness and love.

In "Trespass Against Us" Brendan Gleeson and Michael Fassbender play a rough and tumble father and son duo, heads of a group of Irish Travellers living life on the edge in leafy southern England.

On their knockabout campsite life is a bit of a riot, sometimes literally. Animals roam free, campfires burn day and night, booze flows freely as does the craic.

Fassbender, 39, plays Chad, the only son of Colby (Gleeson), a former free spirit who, now that he has a wife, son and daughter, is secretly beginning to think a settled life would be much better for his growing children.

But Colby sees any talk of buying a house as a threat to the wider family and their rootless way of life. To him it’s a betrayal of all they are and stand for. He’s not prepared to let his son leave, and he’s not subtle in sending the message.

So for the first half hour of "Trespass Against Us," it looks like the film is setting itself up for a mighty battle between father and son, between Chad’s Traveller past and his more settled future, and between his wife’s claim on his loyalty and his father’s.

Before we can figure out which it will be, though, Colby has Chad participate in a heist at a country estate, where he and his buddies help themselves to priceless antiques and artwork.

In their getaway car they drop off their takings to a van waiting in the woods, then they turn around and pursue the police cars because they’re actually hoping for a good chase (from a force portrayed as mostly Keystone Cop halfwits).

Willfully blurring the lines between criminality and playing is one of the main themes of "Trespass Against Us." The bad guys here aren’t actually all that bad, and the good cops aren’t entirely on the up and up either.

“Blessed are the cracked,” says Colby, referring to the wild-eyed Gordon (Sean Harris), the feral man who roams around everywhere nearly naked, for reasons that are never explained, other than because he’s developmentally challenged I suppose.

Gordon looks like a metaphor for a life lived without social rules, and being always in the buff he’s supposed to embody it too, and Harris does his best to convey this intent without much dialogue.

But in a wider sense Gordon’s a sort of stand-in for the Colby men, who alternate between gentle affection and brutal violence without much warning. In their wildness they are closer to the truth of life and the source of nature I think the film is suggesting.

I don’t really know though, to be honest, because the script bobs along from character to character without bothering to explore who they are or why they do what they do.  It’s as if director Adam Smith and writer Alastair Siddons get infatuated with the participants in each new scene they’re working on and forget that they’re all supposed to connect to the ones that precede and follow them.

There’s certainly a lot of truth in the playing of these emotionally inarticulate, unstable men, but that’s mostly down to the fact they’re being played by two of Ireland’s most compelling lead actors.

Fassbender in particular seems a strange pick as Chad, because with his leading man good looks and his quicksilver intelligence he seems smarter, more resourceful and much further seeing than he should be.

Gleeson, meanwhile, turns the glowering menace up to maximum tilt as the unpredictable patriarch who will brook no dissension in his ranks. Colby runs his family like a small company with himself as CEO, which makes for some interesting contrasts with Chad and sets a course for their increasing conflicts.

Michael Fassbender and Brendan Gleeson in Trespass Against Us.

Since neither Fassbender or Gleeson are capable of playing one note characters the squabbles between these two are richly layered, clearly extending all the way back to Chad’s hardscrabble childhood and accumulating like an abscess.

But before we can feel certain that the film is about their inevitable showdown, Chad’s wife and her plans for the future take the film in another direction, which comes with a surprising tonal shift that pulls the rug from under the audience’s expectations.

First Chad is pursued by the police for a crime they know he has committed, but then we are jolted sideways when Chad’s two children go missing from school.

Now we follow Chad and Kelly (Lyndsey Marshall) as they frantically drive around the Traveller halting sites and festivals desperate to find the missing runaways.

Once again Chad happens upon Colby as he’s watching a brutal wrestling match, and the older man’s lack of concern about the missing kids is another indication of just how stone cold his heart is. That awareness haunts Chad and he and his wife speed around frantically.

Behind all this tussling there are interesting questions about poverty and wealth, loyalty and betrayal, what it means to live authentically and what it costs to surrender the best parts of yourself for a quiet life.

Unfortunately the script doesn’t know how to ask those questions, leaving the main actors floundering or improvising in the hope of asking it themselves. That means the last act throws up some plot lines that look like they want to resolve themselves, and by this stage I think you’ll probably want them to too.

Fassbender’s noble brow, coupled with his matchless strength and sensitivity, are just too much for the dodgy surroundings he’s supposed to inhabit, and nowhere is this more apparent than in the film’s final set piece.

What bonds this big dysfunctional family together is love, even though previously there was no love between the two male leads to speak of, only fear and lifelong toxic resentment.

Recent years have seen the emergence of a whole new English film genre, roughly where bourgeois writers, directors and sometimes actors seem to harness the lost vitality of the working class to add some depth to their half-baked capers.

Sadly "Trespass Against Us" turns out to be another one of those, thanks to the half-baked script and the uncertain direction.

Why the film has been titled the way it has, who these people were or will become, why they are Irish but speak with Devonshire accents (I think?), what they want for themselves or why it matters in the scheme of things are questions that the film leaves largely unaddressed.

Gleeson and Fassbender are both world-class actors, in my opinion the top two male film actors of their respective generations. That they appear together in this low budget independent flick should have been a cause for celebration, but it’s as if the director and screenwriter have been given two Ferraris which they proceed to drive like Mini Metros.

You’ll come away from "Trespass Against Us" wondering whom to blame for the debacle.  I suggest you look no further than the writer and director on the closing credits.

The film is on limited release, also on Video on Demand.