Michael D. Higgins will show off his new puppy Misneach during a special TV interview on Ireland's Late Late Show on Friday night ahead of his 80th birthday on Sunday. 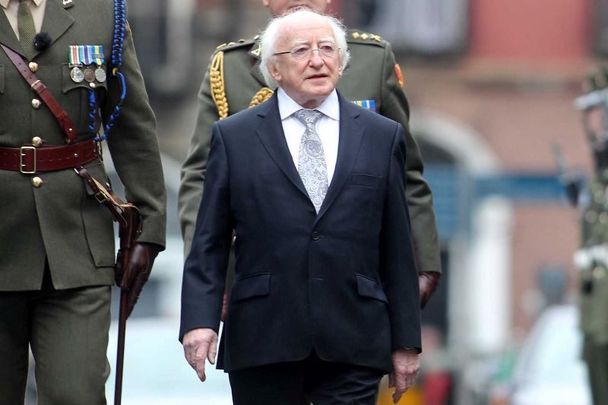 President of Ireland Michael D. Higgins will feature on Ireland's Late Late Show tonight in honor of his 80th birthday on Sunday.

Late Late Show host Ryan Tubridy visited Áras an Uachtaráin for a rare and exclusive chat with Higgins, while he was also able to meet Misneach - the President's new puppy.

Bród and Síoda, Higgins's Bernese Mountain Dogs, were celebrities in their own right before the death of Síoda last year left members of the public heartbroken. However, the President welcomed a new puppy to Áras an Uachtaráin with the arrival of Misneach earlier this year and social media users have been enamored with Bród's new acquaintance ever since.

Tubridy joked that his meeting with the new puppy was a cause of jealousy for Bród.

"Bród eyeballed me and said, “I bet you’re really just here for the puppy…” so I assured him that all dogs are equal in my eyes," Tubridy said on Instagram. "We got on fine after that!"

In an Instagram story, Tubridy said that the puppy had been described as "quite lively, quite bold, and great fun".

Tubridy's interview with the President will air on RTÉ One after the Late Late Show kicks off on Friday evening and the pair are expected to look back over his life and his ten years as President.

"President Higgins is 80 on Sunday and is in fine form as you’ll see tomorrow night," Tubridy said on Thursday.

Several other household names will also feature on Friday's show, which kicks off at 9:35 p.m.

Acadamy Award-winning actress Kathy Bates, who starred in "Misery", "Titanic", and "Richard Jewell", will be joining Tubridy for a virtual chat on Friday, while Ireland rugby captain Johnny Sexton will also be talking to the Late Late Show host.

Sexton will be talking about his chances of making the British and Irish Lions squad in the summer and will also be lending his support to DEBRA Ireland - a charity dedicated to people living with the painful skin condition Epidermolysis bullosa.