Following their epic concert at Slane Castle, Metallica has taken some time to tour around Ireland. 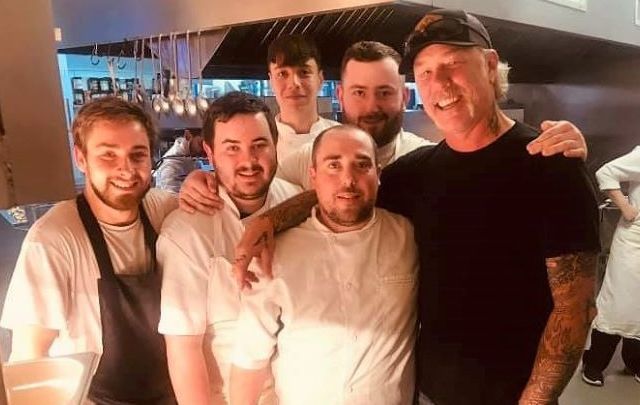 Metallica has taken some time to tour around Ireland and the Cliffs of Moher following their epic concert at Slane Castle over the weekend.

The Independent reports that on Monday, the heavy metal group arrived by private helicopter to the Cliffs of Moher in Co Clare.

Drummer Lars Ulrich shared  pictures of his visit to the Cliffs of Moher on his Instagram:

Incredible day at the very edge of Ireland. #wanna #cliffsofmoher

After exploring, the group headed for Vaughan’s Anchor Inn in Liscannor, much to the surprise and delight of the pub's owners.

Metallica popped in for a bite to eat #metallica#metallicaontour #metallicafans

Owner Lisa Vaughan told The Independent: "We heard a helicopter overhead yesterday afternoon, so we knew there was somebody big in the area but we didn't know who.”

"They parked the helicopter in a spot behind the hotel and went up along the cliffs of Moher and then popped into us before they went. They were superstars, normal, down to earth, ordinary people.

"One of our chefs, Gary Davis would be a big fan of theirs so the lead singer, James Hetfield went into the kitchen to say hello to him."

Not surprisingly, word quickly spread amongst the locals and a crowd began to form outside of the Irish pub.

"There was a big crowd gathered outside the hotel and some of them even came up to the table looking for photos and autographs but they didn’t seem to mind," Vaughan said.

"Please God, we will see a few more famous faces around. We had Bob Geldof last summer and he was an absolute gentleman. We had a few stars through the doors now."

Read More: Bruce Springsteen made a surprise visit to this Irish pub in Boston

Metallica fan Robbie Ball, who was at Slane for the band’s epic concert, told The Irish Sun: “We heard a chopper landing in the car park behind Egan’s [Bar] and I didn’t think anything of it until I came into the village.”

“When I came into Liscannor, my mate Tim, who had been to Slane with me, said that Metallica are down in Vaughan’s having a bite to eat.”

“I didn’t believe it at first but we stuck our heads in to Vaughan’s and they were, just down the back having some food. We went down to them and congratulated them on the gig in Slane and said they had chosen a good place for a bite to eat.”

“We waited outside Egan’s having a pint, hoping that we might get to see them again. When they came out we met them out front of Vaughan’s.”

“They were totally cool. People were asking them for photos and there was no problem at all.

“A good few people got photos as well. It’s something that you don’t expect in a small village in the west coast of Ireland.”

Check out this quick video of Metallica arriving by private helicopter into Co Clare - well for some!

Did you see Metallica at Slane Castle last weekend? Let us know in the comments!