WATCH: Metallica dedicates Whiskey in the Jar to Phil Lynott during Slane concert

Metallica dedicated their cover of 'Whiskey in the Jar' to Thin Lizzy frontman Phil Lynott at Slane Castle over the weekend. 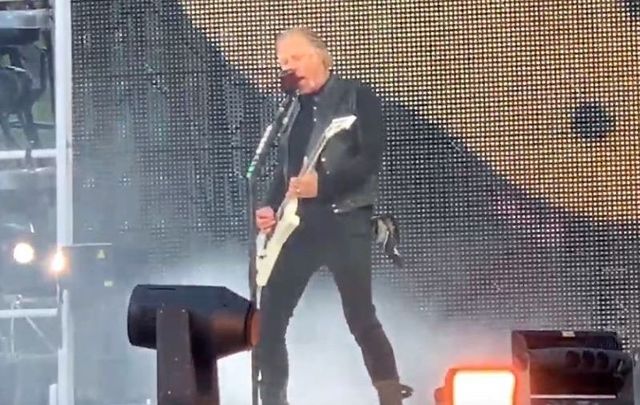 Metallica rocked Slane Castle in Co Meath over the weekend

Metallica dedicated their cover of ‘Whiskey in the Jar’ to iconic Dublin rocker Phil Lynott during the band’s concert at Slane Castle in Co Meath on June 8.

Metallica, who performed for some 75,000 fans this weekend at Slane, first covered 'Whiskey in the Jar' in 1998, reportedly inspired by Thin Lizzy's version.

Though thought to be first recorded in the early 1950s,  'Whiskey in the Jar' became popular when The Dubliners recorded their own version in the 1960s.

In 1973, Thin Lizzy, headed up by Dubliner Phil Lynott, recorded their own version of the song with their characteristic rock’n’roll flair:

Later, in 1998, Metallica also covered 'Whiskey in the Jar.'  In 2000, the group nabbed a Grammy for ‘Best Hard Rock Performance' for the song.

Below, watch the epic video of Metallica performing ‘Whiskey in the Jar’ at Slane Castle and catch singer James Hetfield saying “We love you, Phil” at the end:

After their Slane concert, Metallica’s lead singer James Hetfield shared a post on his Instagram of him and the Dublin city statue of Lynott:

Much respect and love to my favorite songwriter, Mr. Phil Lynott

What's your favorite version of Whiskey in the Jar? Let us know in the comments!