LISTEN: A 'vowel movement' with Malachy McCourt of the new season of TAYSHT

Malachy McCourt, the famous Irish American actor, author, DJ, and raconteur, sits down and chews the fat about writing, dying, and dying to write for the new season of TAYSHT. 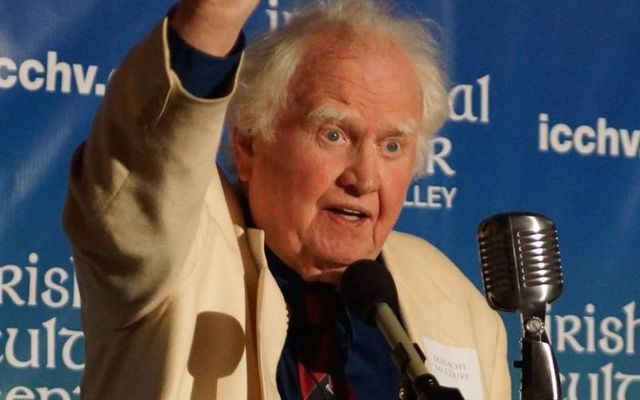 *Editor's Note: Welcome to season two of Mike Farragher's "TAYSHT" series, his column and podcast exploring Irish America's culture and food. You can read the previous installment, the finale of his first season, here.

“I’m told my hospice coverage ends on November 9, so I should probably think about dying by then.”

The comment, made on the airwaves of WBAI, might come as a shock if you weren’t already familiar with renowned raconteur and radio host Malachy McCourt, but the rest of us would expect nothing less from the author of the bestseller, "Death Need Not Be Fatal.”

We are happy to report that as of this writing, the Limerick-born New Yorker is very much alive and rolling around Manhattan on his trusted travel scooter to catch Gabriel Byrne’s show on Broadway or toast his friend Larry Kirwan as he received a lifetime achievement award at Rosie O’Grady’s during the annual Irish American Writers and Artists meeting.

A grand night for our own Larry Kirwan! The Board of IAW&A thanks everyone who made it out to the Eugene O'Neill Award...

“I’m an atheist, thank God,” he says on the debut episode of season two of our TAYSHT podcast, his dry Irish wit still potent into his tenth decade.

Over the course of ten books, 91-year-old Malachy McCourt has written extensively of his American experience: as an actor, writer, one-time pub owner, and politician. He was the 2006 Green Party of New York candidate for governor in New York State, losing to the Democratic candidate Eliot Spitzer.

Of course, he is the younger brother of Pulitzer Prize-winning author Frank McCourt. His advice to aspiring writers is to just write and tell your own story. “Have a ‘vowel movement’ and just get on with it,” he says with a laugh. “People want to hear you tell your story, to perform your story.”

He spends his days cheerleading the efforts of other creatives in the Irish American Writers and Artists collective and you can listen online to WBAI.org to his weekly talk show on Sundays with John McDonagh.

“Being on the radio is one of my favorite forms of storytelling,” McCourt reveals on TAYSHT. “I show up to the studio because I don’t know what’s going to come out of my mouth next!"

Check out the latest TAYSHT podcast, featuring Malachy McCourt, here and over on Spotify: