While others baked bread during the pandemic, John Lee and Martin Nutty made stew…Irish Stew, the podcast of “Conversation for the Global Irish Nation.” 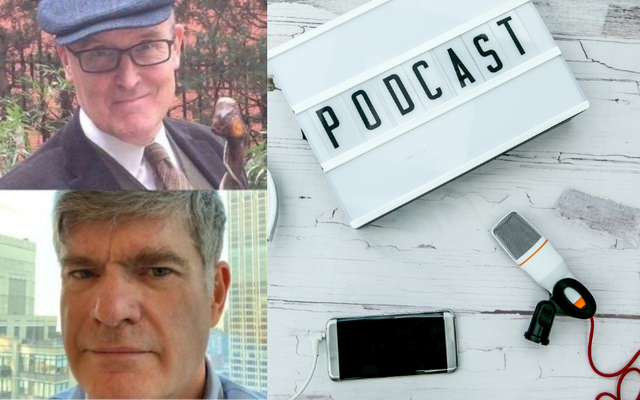 John Lee, co-creator of the successful Irish Stew podcast, looks back on the show so far in anticipation of season 4 launching at the end of this month.

While others baked bread during the pandemic, Martin Nutty and I made stew…Irish Stew, our podcast of “Conversation for the Global Irish Nation.”

On “The Stew” we explore what we see as an emerging global Irish identity of native Irish -those who have moved abroad, others who have moved back, immigrants to Ireland, and people like me who trace their ancestry back to Ireland.

We do so by talking to a diverse list of accomplished, intriguing global Irish voices in our 41 episodes to date, all advancing the understanding of global Ireland.

Brendan Behan’s niece, actor/writer Janet Behan tells of growing up in England and finding herself to Irish for the English and too English for the Irish.

Ted Smyth provides the viewpoint of a Protestant from Ireland’s midlands who went on to be an Irish diplomat working for peace in Northern Ireland.

Working-class novelist Jack Byrne tells of growing up in an Irish enclave in Liverpool, where his identity then was Catholic rather than Irish.

Filmmaker writer Colin Broderick had a similar experience growing up in Northern Ireland--defined there by his Catholic identity, he didn’t start feeling Irish until he came to New York.

A few miles from the Northern Ireland border Turlough McConnell led an idyllic childhood until a brick crashed through the window of his home as The Troubles spread across the border. Now he works to interpret Ireland for America.

Novelist and essayist Peter Quinn is 100 percent Irish American and through him, we explored that identity - related to, but distinct from, an Irish identity.

Cauvery Madhavan is a novelist connecting Ireland, where she now lives, to India, where she grew up, and with her we explore the surprising depth of connections between two seemingly disparate countries.

Ireland’s Ambassador to the U.S. Dan Mulhall shared his global Irish journey in Ireland’s foreign service, opening doors with Irish culture, and by his side every step of the way, a well-worn copy of Ulysses, the inspiration for his new book “Ulysses: a Reader’s Odyssey.”

Irish American Cady Coleman viewed the Global Irish Nation as an astronaut peering down International Space Station where she celebrated St. Patrick’s Day by playing a tin whistle from Paddy Moloney and an old wooden flute from Matt Molloy while floating in space. She commented on our logo, with its lines radiating out from Ireland to representing the diaspora, but she reminded us those lines flowing back to Ireland, too, for a two-way exchange people, ideas, culture and tradition enriching both Ireland and its diaspora, a sentiment echoed by Natalie Nugent O’Shea, co-founder of the Celtic Junction Arts Center in St. Paul, Minnesota.

Fellow podcaster Paul Finnegan spoke of his 11-year run as the executive director of the New York Irish Center, dedicated to “Community, Culture & Care” for Irish immigrants and many others. 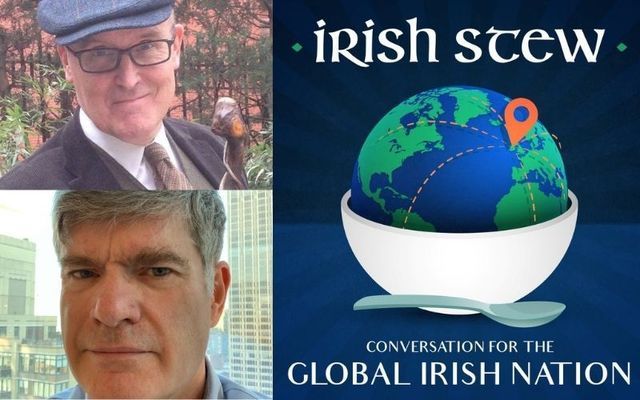 What do we learn from these and other guests?

We learn about the many ways to be Irish, from a Protestant in the republic, from a Catholic in the north, how it’s different to be Irish in London than it is in New York, how playing the “Irish card” abroad can open doors, but it’s up to you to keep them open. We learn of people who discovered their Irish identity as adults like New Yorker cartoonist Liza Donnelly, others who left that identity aside, returning to it many years later.

We talk about the lasting imprint of the Great Hunger as the central event in the saga of the Irish Diaspora, of revolutions and risings with a battlefield archaeologist Damian Shiels and others and the topic of “The Troubles” is a subtext to so many conversations.

On Irish Stew we explore global Irish storytelling--Northwell Health CEO Michael Dowling’s riveting memoir of growing up in rural Irish poverty, Sorcha Glackin’s inspiring documentary on the hard knock Ballymun Kickhams GAA, hard-charging business executive Jeffrey Hayzlett touched by the poet as he describes his emotional first trip to Ireland, barrister Ruth Cannon and her Stories of the Four Courts blog, and stories told in music by violin virtuoso Gregory Harrington…as at home playing in NY’s Carnegie Hall as he is playing before 80,000 in Green Bay, WI’s Lambeau Field.

A global Irish Identity…there’s something there, an undercurrent, an evolution, a connectivity, a resource, a resiliency, something to build on, the foundation for a global Irish nation.

We’re going to pick up the “Global Irish Nation Conversation” on May 30 when we launch Season 4 with noted Irish journalist and digital pioneer Mark Little, our Bloomsday episode with Joyce scholar Prof. John McCourt recorded from Trieste, Italy where Joyce wrote much of Ulysses,  and Black 47 frontman Larry Kirwan, a driving force behind the hit Tony Award-nominated Broadway show Paradise Square.

We hope you’ll join co-host Dublin’s own Martin Nutty, Irish American me, and our guests on Irish Stew for the ongoing global conversation…wherever you get podcasts.