Liam Neeson and Sean Spicer both appeared on The Late Late show on Friday night, but it was the actor and not Trump’s former press secretary who proved to be the most controversial. 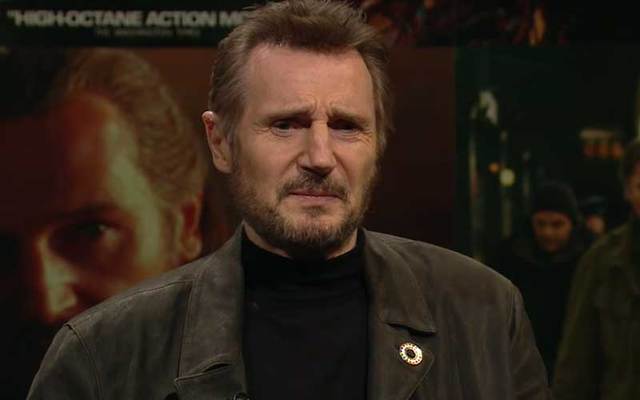 Liam Neeson has come under fire for calling the #MeToo movement a "witch-hunt" on Irish talk show The Late Late Show.

Sean Spicer and Liam Neeson both appeared on the RTÉ show on Friday night, and surprisingly it was the actor and not Trump’s former press secretary who proved to be the most controversial.

The action star is now facing criticism for defending several high-profile men accused of inappropriate sexual behavior and saying that there’s “a bit of a witch-hunt happening.”

Neeson’s comments came after host Ryan Tubridy asked him for his thoughts on the #MeToo campaign that has been sweeping through Hollywood ever since the allegations against producer Harvey Weinstein were made public last October.

“There is a bit of a witch hunt happening, too,” Neeson said. “There’s some people, famous people, being suddenly accused of touching some girl’s knee or something, and suddenly they’re being dropped from their program or something.”

Neeson then mentioned the allegations against A Prairie Home Companion’s Garrison Keillor and actor Dustin Hoffman, who has been accused of sexual misconduct by several women.

Keillor allegedly touched a woman  wearing clothes on the bare back during work hours and got fired for it.

Kathryn Rossetter alleges Hoffman repeatedly groped her during the 1983 Broadway production of Death of a Salesman. Neeson dismissed it as “childhood stuff” and somehow weirdly linked the groping to “superstition.”

“The Dustin Hoffman thing, I’m on the fence about that. When you’re doing a play, and you’re with your family — other actors, technicians — you do silly things. And it becomes superstitious if you don’t do it every night you think it’s going to jinx the show. I think Dustin Hoffman was… I’m not saying I’ve done similar things like what he did. Apparently, he touched another girl’s breast and stuff. But it’s childhood stuff what he was doing.”

Dear Liam Neeson, until you've been in the position of feeling completely vulnerable over the fear of being groped, shut up. What a disappointed he turned out to be. 🤷🏻‍♀️#MeToo #LateLateShow

I can’t believe this Liam Neeson was a national treasure and now....he’s over

I was literally just about to tweet "Liam Neeson seems like such a nice, normal person" and then he referred to the #MeToo movement as a bit of a 'witch-hunt'. #latelate

"It's a very demanding job and it's a very intense place to work under any president and this president added an element of excitement to it." said Spicer on the show.

He said he “90 percent” supported Trump’s plan to build a border wall and that he would vote for Trump again.

On Trump’s most recent comments about immigration, Spicer said: "As an Irish-American, someone who understands the trials and tribulations of so many Irish folk coming to America, I'm very proud of America's history of welcoming immigrants.”

"I believe that America is a great country that welcomes people who want to come and make a name for themselves, pursue the American dream and make it better. Immigrants have made our country what it is."

When Tubridy asked him about the 2005 Access Hollywood tape, in which Trumps boasts about his sexual advances on women, Spicer said: "Obviously I don't agree with what was said on the tape. The president, at the time the candidate, apologized for it and went on television and said so.

"I think we've all said or done things that we regret. I think the president, then the candidate, expressed remorse and the one thing about being a Catholic is that we are all taught forgiveness. The president went on television that night and said I regret these thing.

"I think if we're going to ask forgiveness for ourselves sometimes, we're also taught to give forgiveness."

Read More: Sean Spicer says he's "one of the most popular guys in Ireland"

Tubridy also asked what the president was like to deal with on a daily basis.

Spicer said: "He's very straightforward, you know where you stand with him at all times, good or bad, and there's no beating abound the bush.