WATCH: Learn how to do an Irish accent with Saoirse Ronan

Oscar-nominated actress Saoirse Ronan has some top pointers for how not to sound like a leprechaun. 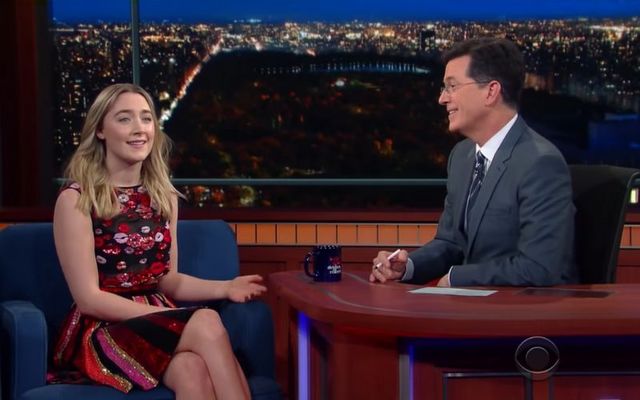 Many of the worst offenses in the history of bad Hollywood accents have been committed against the Irish, and so it came as a sigh of relief to many to learn that young Irish actress Saoirse Ronan was to undertake the role of Eilis Lacey in the movie adaptation of Colm Tóibín’s novel “Brooklyn.”

Even if she didn’t manage to alter her own Dublin/Carlow brogue into something more like the lilt of Co Wexford, at least you’d be able to tell she’s Irish. (We’re looking at you, Sean Connery!)

Thankfully, Saoirse is here to save the day once more and give the world a lesson on exactly how to imitate her in the future.

Appearing on “The Late Show with Stephen Colbert,” the 21-year-old, who just earned her second Oscar nomination for Best Actress in “Brooklyn,” pointed out the major errors made by those wishing to mimic her accent, including attempts to reach the high register of some imaginary leprechaun and failing to use coherent words.

She also hopefully settled the story of her name once and for all.

Unfortunately, even though Ronan has been an acclaimed actress for over a decade now, earning her first Oscar nomination at just 11 years old, and despite handy tips from both Ryan Gosling and Ellen, the world still has difficulty in pronouncing her name.

Having spent a large quantity of time speaking about her “difficult” name instead of discussing her already successful and still rising career, Ronan stepped up to the plate to help things out.

Bringing Colbert through a series of Irish names that confound all those outside of Ireland who look upon them, Ronan gives a perfect pronunciation run-through to save all the famous Caoimhes, Niamhs and Siobháns of the future from having to go all through all the fuss about their name she has had to put up with.