Kathy Griffin booed by Irish crowd, passes out during “craziest ever” Dublin show

Kathy Griffin was booed by the crowd at her Dublin performance after she mistakenly included Ireland as part of the United Kingdom. 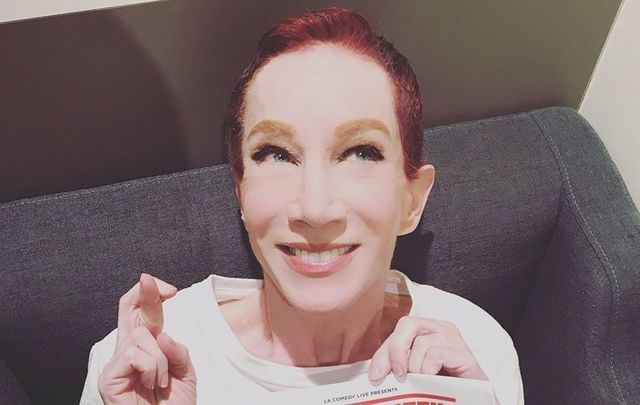 Kathy Griffin is currently touring the world with Laugh Your Head Off. Twitter

Kathy Griffin was booed by the crowd at her Dublin performance on Wednesday, November 8 after she mistakenly included Ireland as part of the United Kingdom.

She stated it was nice “being in the United Kingdom,” and seemed genuinely shocked when the friendly crowd suddenly turned to her booing and catcalling.

Griffin became so startled she had difficulty continuing with her routine, The New York Times reported. Most of the Irish people at the show in Vicar Street clearly believed Griffin, an Irish American,  should have known better.

Holy Shitballs! I had no idea The New York Times was at, what I will admit was my craziest show ever, last night in Dublin. Totally fair review. Could not ask for a better first line. pic.twitter.com/UScGNqgwHJ

She has been a frequent visitor there and visited her grandmother's hometown of Drogheda in Co. Louth in 2007with a TV camera in tow. Her Irish escapades were filmed for her Bravo series “My Life on the D List.” She was given a civic reception

On Wednesday in Dublin Griffin gave what the New York Times called a “wild two hour and fifteen-minute performance” and compared her to Lenny Bruce.

The show is called  “Laugh Your Head Off,” doubtless after her American career was upended when she was pictured holding a Donald Trump mask smeared with ketchup. TMZ’s headline: was “Kathy Griffin Beheads President Trump.”

Griffin was attacked bitterly by President Trump and lost her CNN slot on New Year’s Eve which had become an eagerly awaited feature of the network’s coverage from New York's Times Square.

Kathy Griffin should be ashamed of herself. My children, especially my 11 year old son, Barron, are having a hard time with this. Sick!

She revealed she was also put on a no-fly list and the Secret Service investigated her for what she says was  “conspiracy to assassinate the president.”

After more than two hours on stage, Griffin began telling a story about Mariah Carey when she suddenly began slumping. She called to her boyfriend who rushed on stage to support her.

After a time away Griffin returned but merely to say goodnight ending a bizarre night in Dublin for the controversial comic.

Thank you for an amazing night Dublin! pic.twitter.com/SBRmkjgmHB