The hotelier John Fitzpatrick is on his way to Windsor this weekend to see his friend Meghan Markle tie the knot with Prince Harry. 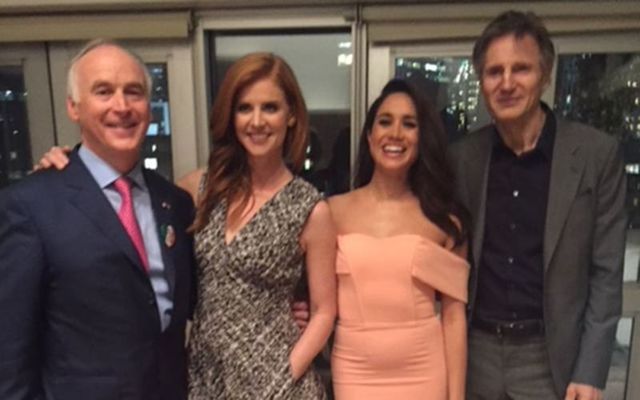 New-York-based Irish businessman and honorary OBE recipient John Fitzpatrick will be hanging out with the Suits crew at Meghan Markle and Prince Harry’s wedding.

No matter how much we try to deny it, if one of the golden-ticket invites to the royal wedding of Prince Harry and Irish American actress Meghan Markle had landed on our laps over the last few weeks, there’s no way we wouldn’t be on a flight over to Windsor right now. And so the news that New-York-based Irish businessman John Fitzpatrick has landed himself on the Windsor Castle guestlist for Saturday, May 19, has us more than a little green with envy.

Fitzpatrick, a hotelier and philanthropist who received an honorary OBE from the Queen for his work toward the peace process in Northern Ireland and his massive charity work, has been a friend of Markle’s for some time, meeting with her in his New York hotel with thanks to Irish golfer Rory McIlroy and even inviting her along to the White House and his Clinton fundraiser.

“I'm delighted to be asked because I know Meghan but she has so many people to invite so I really appreciate her inviting me. It's great,” Fitzpatrick told IrishCentral.

“I'm sure they have a lot of more important guests to invite so I didn't expect it at all but I got an email from Buckingham Palace to give me the heads up to say that they would like your full address and that Meghan and Prince Harry would like to write to you. That was a few months ago so I kept that quiet and finally it arrived in from Buckingham Palace about four weeks ago.”

And not only was Fitzpatrick lucky enough to bag an invite but he’s set to hang out with all the “Suits” cast while in England as another friend of his Sarah Rafferty, who plays Donna in the hit show, invited him to go sightseeing with the rest of Markle’s cast members.

“I think to be in Windsor and St Paul's Church, that's going to be spectacular,” he admits, however.

“You always see them on television but you never really know what it's like. I think that will probably be the best part of the whole thing. The whole day will be great but I think the church will be special.”

While one Irish psychic has predicted that the day will end in disaster, Fitzpatrick only has high hopes for Meghan and Harry as a married couple.

“I think it's very natural the way they met and the way they fell in love. Some royal weddings may not have been as happy as others but this one will be a good one,” he stated.

“I think it will be a great example of the future generation: meeting the people they want to meet and getting on with life together as best they can. I think another great example is Prince William and Kate. The younger generation coming up now, it's just great to see them being happy.”

The Dublin-born philanthropist also doesn’t have much time for those who think that there’s no place for an Irish person at a British Royal wedding, stating “we've moved well past that now.”

“I don't think anybody would object to an Irish person going to a Royal Wedding. I'm proud to be going, to be honest with you because I think over the last 20 years, England and Ireland have become close friends and I think what's really helped us was the Queen's visit to Ireland ...

And what to buy as a wedding gift for a Prince and a future Princess? Well, the royal couple has made that easy for their guests, asking them to donate to any of a list of charities instead of a gift for themselves.

“It's the same thing with anybody's wedding, what do you buy them? I don't think they need a toaster somehow!”

Will you be tuning into the wedding on Saturday? Let us know if so in the comments section, below.