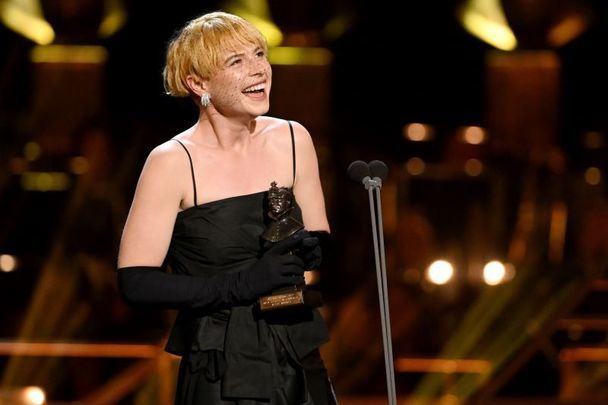 April 10, 2022: Jessie Buckley accepts the award for Best Actress in a Musical for "Cabaret" on stage during The Olivier Awards 2022 with MasterCard at the Royal Albert Hall in London, England. Getty

Given all her movie success, most recently in her Oscar-nominated role in The Lost Daughter, it’s perhaps easy to forget that Co. Kerry native Jessie Buckley is an amazing singer who has a burgeoning music career.

On Friday night’s Late Late Show in Ireland, Jessie, 32, and her newest collaborator, British guitarist Bernard Butler, wowed the audience with their song “20 Years A-Growing.” Jessie and Bernard recorded an album, For All the Days That Tear the Heart, due for release this month, and they’ll be promoting their finished product with in-person shows including the All Together Now festival in Co. Waterford from July 29-31.

One of Killarney’s finest exports just scooped her first Olivier Award – the U.K. equivalent of our Tonys – for her star turn as Sally Bowles in Cabaret. Jessie first came to prominence in 2018 starring in the film Wild Rose about a Scottish singer with a prison record who dreams of making it big in Nashville.

Jessie’s career is going from strength to strength, but her success is a lot to absorb. She recently told The Guardian that she spent most of the 2022 Oscars ceremony “in the bar.”

The Lost Daughter star Olivia Colman introduced Jessie to the comic legend Bill Murray, “who I love…I totally bottled it!” she said.

And though Jessie was dressed to the nines for the Oscars red carpet in a pink satin gown by the A-list designer Erdem, her first preference would be an Academy Award bash where “we could all just wear tracksuits, have pizza and beer, that would be a great party.” Just like most of the world watches the Oscars!