Irish Stew podcast is continuing the conversations with the global Irish. In the latest episode, hosts John Lee and Martin Nutty chat with Mark Little, an award-winning foreign correspondent and TV anchor. 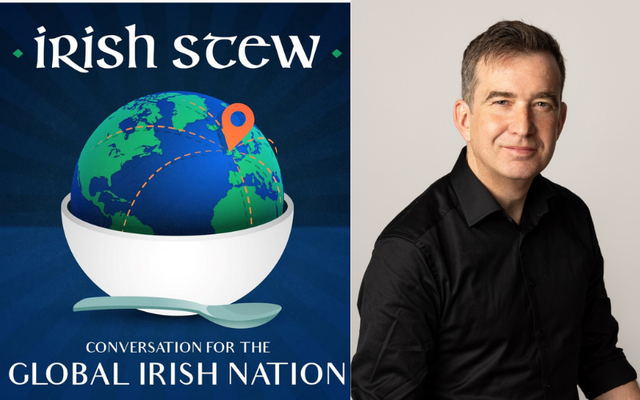 Season four of the Irish Stew podcast is out now and the first episode features trailblazing journalist Mark Little, a former Irish newscaster working to make sense of social media.

After a short hiatus, hosts John Lee and Martin Nutty, are back with a brand new season of their podcast the Irish Stew - a conversation with the global Irish.

In the opening episode, they sit down with Dublin-born Mark Little, an award-winning foreign correspondent and TV anchor.

Coming from a family where there was a daily scrum over who got the newspaper first,  armed with “premature cynicism” and blessed with an insatiable curiosity for what made the world work, journalism beckoned Mark and after graduating from Trinity College he landed a job with RTÉ, Ireland’s national broadcaster.

In this episode, he shares stories from his “eyewitness to history” vantage point on some of the biggest news stories of his time as RTÉ’s first Washington correspondent and later host of Prime Time.

And somehow he found time to write three books.

He explains why he switched gears and dove into the uncharted waters at the intersection of global journalism and digital media with his tech startup Storyful, the first social media newswire created out of the need to break the news faster and use social content to add context to reporting.

He would go on to sell Storyful to News Corp about five years later, and after leadership roles at Twitter, he and Áine Kerr founded a new company in Dublin called Kinzen with the mission to protect every online community and public conversation from disinformation campaigns and harmful content.

Join the Irish Stew for an entertaining, occasionally sobering, and always engaging tour of the global media world with one of its true pioneers, Mark Little.

For listeners who are in New York City, tomorrow the Irish Stew will be doing a podcast get-together with Paul Finnegan of Centerpiece NY and you are welcome to join

Happy Birthday Colin Farrell! Let’s celebrate with our choice of his best movies