Harriet the Irish singing donkey will brighten your day

Let's face it! 2020 is kicking everyone's ass for bad news. Harriet is a ray of sunshine. 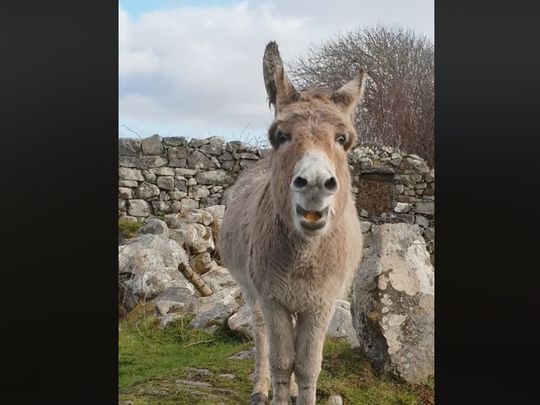 A gorgeous donkey named Harriet can hit higher notes that you... we guarantee! This lovely ass will put a smile on your face.

An Irish singing donkey named Harriet capturing the hearts of people all around the Internet back in 2018, but we stumbled across this and thought if ever there was a time for a giggle it's now!

Irish man Martin Stanton helped usher Harriet to fame after he posted a video of the Irish singing donkey to Facebook, in Oct 2018.  Since Harriet's amazing singing has had 1.16 million views!

In his original post, Stanton said: “I visited the beautiful Harriet today (Sunday 21st October) She could never hee haw like other donkeys but apparently she's now an opera singer!!”

Not bad for a donkey from Connemara!

Speaking with ABC News Stanton said, “She [Harriet] lives about 20 minutes away from me in Toureen, Connemara.”

“I know the family who own her and I bring carrots, bread, and ginger nut biscuits. She never hew-haws like other donkeys.”

Stanton noted that he originally called Harriet Harrison before realizing the donkey was indeed a female.

“I try to visit whenever I can because she is adorable, so friendly and gentle. I found the video funny so I just posted it. I didn't think it would go viral.”

Watch the video of Harriet the Irish singing donkey here:

The Irish countryside is gorgeous, but if you want to get straight to it... 17 secs in.