Some Irish fans are disgusted with Saoirse Ronan's SNL performance, claiming she promoted stereotypes and mocked the Irish famine in her opening monologue and Aer Lingus skit. 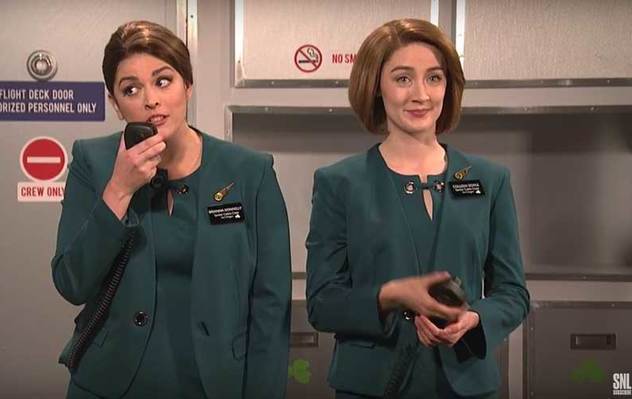 Some Irish fans are disgusted with Saoirse Ronan's "SNL" performance, claiming she promoted stereotypes and mocked the Irish famine in her opening monologue and Aer Lingus skit.

"Saturday Night Live" has faced some significant backlash for its skit this weekend that poked fun at Irish airline Aer Lingus and portrayed the Irish as Aran-sweater-wearing, potato-loving, fiddle-playing owners of many dogs (no one is quite sure where the last one came from).

Aer Lingus themselves handled the situation with humor and aplomb, mimicking one of Donald Trump's tweets where he expressed his distaste for "SNL" and Alec Baldwin, who impersonates him.

But some Irish are not only upset with "Saturday Night Live" and the writers who came up with the skit but also with host Saoirse Ronan for going along with the idea instead of standing up for her country.

The 23-year-old star of "Lady Bird" was hosting "SNL" for the first time, along with musical guest U2, making it an unusually Irish moment – one she jokingly dubbed in her opening monologue as a "special St. Patrick's Day episode of Saturday Night Live."

Some fans from her home country are calling foul, though, and expressing disappointment that Ronan was complicit in such stereotypical jabs.

Writing in the Irish Independent, Andrea Smith called out Ronan, stating that "some of us are deeply disappointed at one of our own brightest stars reinforcing stereotypes that are outdated and insulting."

"It’s hilarious to poke fun at the reminder that a million of our ancestors died because the potato crop failed during the Famine, isn’t it Saoirse? Gas that another million were forced to leave the country too, many of whom ended up in the US, where SNL is recorded."

Smith pondered whether Ronan was aware of a now-famous 1997 episode of BBC soap "EastEnders" (perhaps not, she would only have been 3 or 4 at the time) where the portrayal of Irish as dirty, rude drunks caused so much uproar it resulted in an apology from the BBC.

She ended with a warning to Ronan that while the Irish are still rooting for her to get a much-deserved Oscar nomination for "Lady Bird," failure to learn and grow from this experience could result in a lack of support from her home country:

Don’t be complicit in making us the butt of the joke again please Saoirse, and think before you throw us under the wheels of the bus just to further your award-season ambitions. Stand up to those who try to involve you in things that make you uncomfortable, and look to strong women in your profession like Meryl Streep, Helen Mirren, Anna Kendrick and Halle Berry, who fight for what is right and don’t remain silent in order to get ahead.

We’re letting this one go on account of our genuine pride in you, but seriously, don’t push us Saoirse. We could go off you very quickly!

For her part, Ronan has not yet commented on the furor. She did, however, get some good news yesterday – that she will receive the top actress award from the Palm Springs Film Festival.

Were you disappointed in Saoirse Ronan for her performance on Saturday Night Live? Do you think people are being too hard on her? Share your thoughts in the comment section.