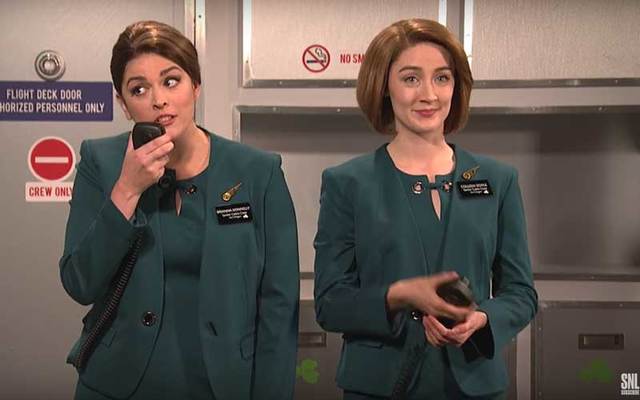 After decades seeking to update its image as more than just a twee Irish airline, Aer Lingus will hardly be happy with the 'Saturday Night Live' impersonation led by Irish actress Saoirse Ronan on Saturday night.

Ronan played a flight attendant on what looked like an ancient Aer Lingus jet in the skit along with several SNL cast members.

Read More: Saoirse Ronan's hilarious SNL promo has us SO EXCITED for this weekend

Then came the shamrockery: a dog was stranded on the runway, the captain leaves the cabin to find out it is his -- doh.

Then, the piece de resistance -- the menu.

It appeared the only item on the menu was -- you guessed it -- potatoes. The news was delivered by a very overweight flight attendant with fake red hair.

After years of seeking to change its image to a modern updated airline (which is now, coincidentally, owned by British Airways and their new flight partners), it was nothing but the same old stories.

Read More: SNL’s Melissa McCarthy says being Irish is “one of the ways I approach the world”

The last scene showed the captain leaving the cockpit again and a half dozen dogs exiting with him.

As a piece of satire, not very funny and for Aer Lingus, an uncomfortable reminder how others see the airline despite its upgrade. All we needed was a cow ambling down the aisle to complete the scene.