Irish Screen America is celebrating Irish female filmmakers with free online screenings during its "Through the Eyes of Women/Trí Shúile na mBan" program this month. 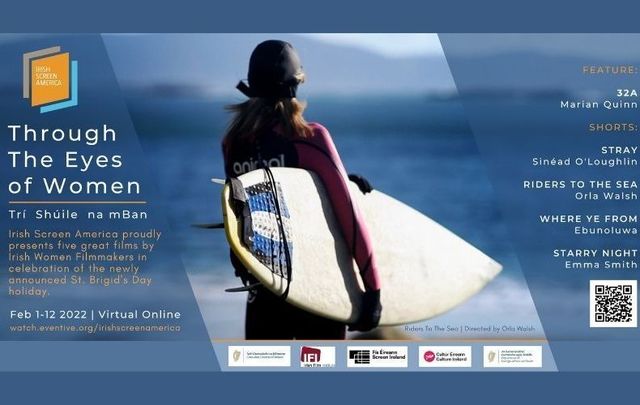 This week, enjoy a selection of Irish films for free through the "Through the Eyes of Women/Trí Shúile na mBan" online program.

In honor of St. Brigid, Irish Screen America in association with the Consulate General of Ireland in New York is presenting a series of five screenings of films by contemporary Irish women filmmakers.

The films will be screened starting on St. Brigid’s Day, February 1, in the US and Ireland and feature a panel discussion with the filmmakers. The program is free and will be available for streaming online through the month of February.

The program titled "Through the Eyes of Women/Trí Shúile na mBan" represents a diverse range of voices, styles and themes centered on the ages of women all presented through the gaze and lens of Irish women filmmakers.

The films include the feature film "32A," as well as short films "Stray," "Riders To The Sea," "Where Ye From," and "Starry Night."

Here are the Irish films featured in the "Through the Eyes of Women/Trí Shúile na mBan" program:

It's 1979 and Maeve Brennan is 13 years old and lives on Dublin's Northside. The summer holidays beckon for Maeve and her trio of friends, Ruth, Orla, and Claire, all focused on the vagaries of puberty, first love, and avoiding Sister Una.

A woman returns to her home after a violent break-in that has robbed her of her husband and her peace of mind. Now alone, only she can discover if she is ready, or able, to begin life again. Starring Tony award-winning actress Marie Mullen.

A surfing duel breaks out between a male and female surfer off the West Coast of  Ireland. Breaking waves, racing hearts, and the treachery of Lycra.

Artist Ebunoluwa teamed up with The Bllyboyz and Dee the Anti-Social to create this powerful and thought-provoking short about being black and Irish in Ireland.

Cara must make a choice - abandon her sisters and pursue her dreams or sacrifice herself so that one day they too might stand a chance.

Click here to find out more about "Through the Eyes of Women/Trí Shúile na mBan" with Irish Screen America in association with the Consulate General of Ireland in New York.