A look at some of Brenda Fricker's best movies. 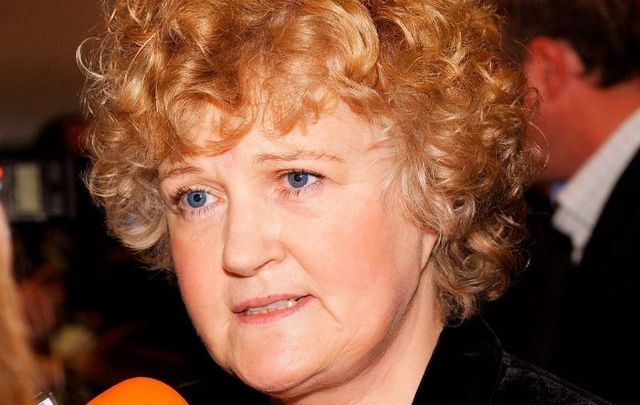 Dublin native and "My Left Foot" actress Brenda Fricker has had an absolutely stunning career.

Brenda Fricker, the Oscar-winning Irish actress, was born on February 17, 1945, in Dublin, Ireland.

Though going on to become a successful actress on both the screen and stage, Fricker had originally intended to follow her father’s footsteps into journalism when she was a teen. Her mother, Bina, was a teacher, and her father Desmond was a journalist at The Irish Times.

At the age of 19, Fricker was working as the assistant to the art director at The Irish Times when she stumbled upon acting “by chance.” In 1964, she had an uncredited role in the film ‘Of Human Bondage,’ as well as RTE’s first soap opera, ‘Tolka Row.’

Fricker continued working in smaller Irish theater productions before heading to London to continue her craft. There, she trained at the Royal Shakespeare Company and Great Britain's Court Theater Company.

Later, Fricker gained more attention in the UK after she appeared as Nurse Megan Roach on the BBC One drama ‘Casualty.’ Beginning her role in 1986, Fricker went on to appear in over 70 of the show’s episodes.

Read More: Celebrating the incredible story of Christy Brown on the anniversary of his death

Soon after, Fricker landed what would become her most famous role, starring as Daniel Day-Lewis's mother in "My Left Foot," based on the true story of Irish man Christy Brown.

Fricker’s turn in ‘My Left Foot’ earned the actress her first and only Oscar which she won for Best Supporting Actress, beating out Julia Roberts, Angelica Houston, Dianne West, and Lena Olin that year.

“Anyone who gives birth 22 times deserves one of these,” Fricker said in her acceptance speech in a nod to Mrs. Brown. She added that she would “very proudly” be taking the Oscar with her “back to Ireland.”

Daniel Day-Lewis also won for Best Actor for "My Left Foot." The Irish film was nominated for Best Picture as well as Best Director for Irish writer and director Jim Sheridan but lost in both of those categories.

In 2017, after the scandal broke about Harvey Weinstein, whose company produced "My Left Foot," Fricker said of him: "there really was something repulsive about him and he would have been very aware of my dislike for him."

Later in 1990, Fricker again teamed up with Jim Sheridan for another Irish film, "The Field." In the movie, she played Maggie McCabe, wife to Bull McCabe, played by Richard Harris.

Fricker later said in her career: “Of all the films I've made, only three do I remember where I felt I'd moved forward as an actress: 'Cloudburst,' 'My Left Foot,' and 'The Field.'”

Following her Oscar success, Fricker landed some major supporting roles in American films such as "Home Alone 2: Lost in New York," "Angels in the Outfield," and "So I Married an Axe Murderer."

Following her role in 1996’s critically acclaimed "A Time to Kill"’ Fricker all but disappeared from American blockbusters, focusing her attention instead on productions in Canada, Ireland, and the UK.

In 2003, Fricker starred alongside Cate Blanchett and Colin Farrell in "Veronica Guerin," based on the late Irish journalist’s life.

The film went on to win the 2003 IFTA for Best Irish Film.

In 2005, Fricker again featured the IFTA’s Best Irish Film of the Year "Rory O’Shea was Here." She was also nominated for a Best Supporting Actress IFTA.

2011 saw the last of Fricker's major film appearances. She featured in "Albert Nobbs," which scored her another IFTA Best Supporting Actress nomination, as well as "Cloudburst," which is considered a "landmark" in LGBT films.

Maintaining a relatively low profile, Frickers now lives back in Dublin and has said that her loves include her pet dogs, drinking Guinness, reading poetry, and playing snooker.

What's your favorite Brenda Fricker movie? Let us know in the comments!