Garth Brooks was spotted in the famous Dick Mack's pub in Dingle, Co Kerry where he treated a delighted crowd to a singalong. 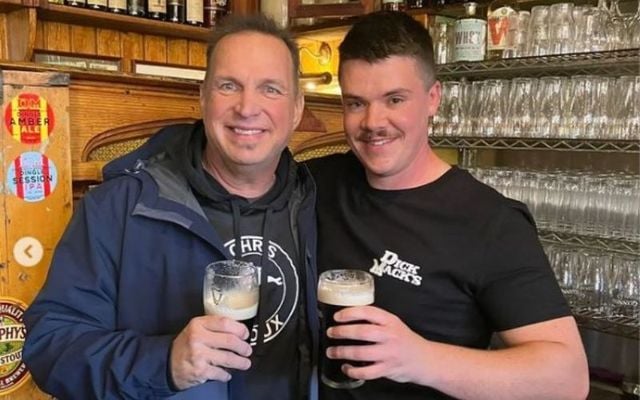 Garth Brooks treated locals in Dick Mack's Pub in Dingle, Co Kerry to a nice surprise when he walked through the doors.

Brooks drove the rumor mill into overdrive this week amidst his much-hyped string of gigs at Dublin's Croke Park, and speculation was rife that the "Ireland" singer would be taking a much-needed break in the Kingdom of Kerry in between his concerts.

On Tuesday evening, the speculation became reality when Brooks treated the unexpected crowd in the Dingle pub to a few songs, and even went behind the bar to pull a pint of Guinness with a little help from the bartenders.

In a clip shared with IrishCentral, Brooks is seen tuning his guitar before singing an acoustic version of "Piano Man" by Billy Joel, and the crowd soon follows suit for a beautiful impromptu singalong.

Visitors to Dick Mack’s pub in Dingle, Co. Kerry were treated to a performance by none other than country superstar Garth Brooks this week! Brooks is currently in Ireland as part of his five nights of shows in Dublin, which concludes this weekend.

Posted by IrishCentral.com on Wednesday, September 14, 2022

The visit was filmed by a camera crew and one local who happened to be there said that Brooks had "high security with him."

His wife and fellow country music star Trisha Yearwood was also there and in between songs Brooks told the crowd that afterward, he was heading to one of the local stores to buy her a handmade Irish scarf.

In an Instagram post shared by Dick Mack's, the pub said "Having a pint, sharing stories and singing a song! What it's all about!"

The country singer's return to Ireland comes eight years after his Croke Park gigs were famously canceled, Last weekend he performed three sold-out concerts at the stadium and his last two gigs are scheduled for this Friday and Saturday.