After 2014's canceled show the trim country music star is ready to give Irish fans a "hug" playing hits he hasn't performed in 20 years. 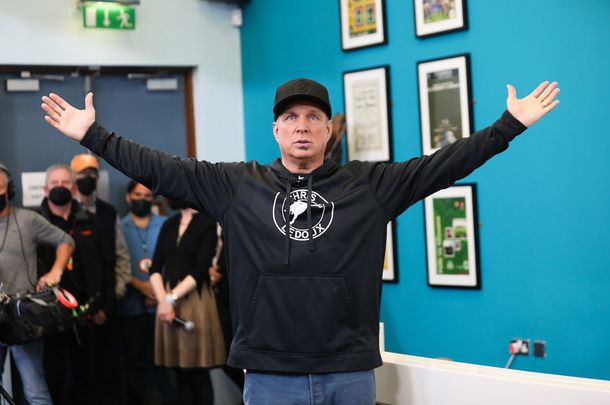 US country singer Garth Brooks has arrived to Ireland for five shows at Croke Park stadium in Dublin.

Eight years after his Croke Park gigs were famously canceled, Garth Brooks is back to play for five nights at the Dublin stadium and the American country star is gearing up for a "love fest".

Speaking to the media Brooks said he'd lost 50lbs in preparation for the shows. He also joked that some super fans were "crazy enough to go to all five nights".

Delighting his Irish fans he also revealed that he plans on singing some of his older hits, such as "If Tomorrow Never Comes", for the first time in 20 years.

Brooks said, "It’ll be a joy to sing that song - it’s stood over the test of times."

Despite the fact that Brooks' musical career spans almost 40 decades he admitted that he still gets "nervous".

He also said it's his hope that the crowd partying will be the main sound at Croke Park. After the planning battle and protests by residents surrounding the 2014 concerts, Brooks is ready to celebrate with his Irish fans.

“I’m hoping I can’t hear myself sing... Especially after 2014 there’s pressure - but Ireland is love and you want it to be worth it for those people who waited so long.

“I don’t know about redemption, as much as finally getting to hug them…”

Speaking at a press conference he admitted that he treats himself like a boxer getting ready for a big fight and gets himself in physical shape for gigs such as these. He admitted that despite loving food he'd lost 50lbs in weight to prepare.

His five nights in Dublin will kick off on Friday, Sept 9 with his last show on Saturday, Sept 17.