Five of the best live Irish music performances of all time

These five performances are up there with the best of what Irish music has to offer, boasting hard-hitting lyrics, stunning vocals, and incredible crowd interactions. 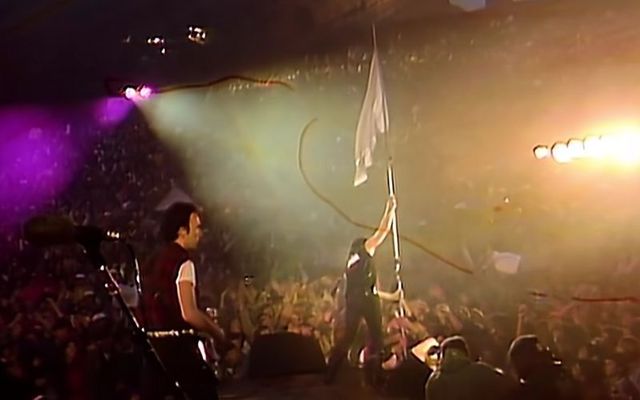 U2 frontman Bono holds a white flag aloft during the group's performance of Sunday Bloody Sunday at the Red Rocks Amphitheater in Colorado in 1983. U2 YouTube

From U2 to Aslan, Ireland has produced some of the very best live bands in the world.

These five performances are up there with the best of what Irish music has to offer, boasting hard-hitting lyrics, stunning vocals, and incredible crowd interactions.

You can count yourself very fortunate if you managed to catch any of these performances in the flesh.

No list of great Irish live music performances could be complete without U2's iconic performance of Sunday Bloody Sunday at the Red Rocks Amphitheater in Colorado in 1983.

The performance is rife with iconic moments, from Bono's famous introductory declaration that "this is not a rebel song" to the sight of the U2 frontman holding a white flag aloft while marching to a militaristic drumbeat.

Performances of Sunday Bloody Sunday during U2's "War" tour in 1983 helped cement the band's anti-war status, while this particular performance was included in the Rolling Stones list "50 Moments that Changed the History of Rock and Roll".

As was the case with Sunday Bloody Sunday, the message and popularity of Zombie quickly spread beyond Troubles-era Northern Ireland, leading to this iconic performance the Palais Omnisports de Paris-Bercy in Paris in 1999.

"We wrote this song five years ago hoping for peace in the North of Ireland. Things are looking better than ever, so let's hope for peace for Christmas," O'Riordain told the court as she invited them to clap along.

A video of the performance has received a whopping 137 million views on YouTube, making it one of the most popular Irish videos on the platform.

While Sunday Bloody Sunday and Zombie are anti-war anthems suited for a large venue, Aslan's This Is is arguably ideally suited for the intimate atmosphere of Vicar Street.

This 1999 performance encapsulates everything great about one of Dublin's best-ever bands, including pitch-perfect vocals, hard-hitting lyrics, magnificent interaction with the crowd, and frontman Christy Dignam's unforgettable stage presence.

Few Irish songs hold a candle to This Is on the best of days, but hardly any come anywhere close to this performance.

Mundy and Sharon Shannon took Ireland by storm with their 2008 cover of Steve Earle's Galway Girl, which became an instant classic.

The duo has brought the song to venues and festivals around the country for the past 14 years, but it is this 2016 performance in Galway City that stands out.

More than 15,000 people took part in the performance on June 11, 2016, making it the biggest-ever street performance of Earle's classic.

With plenty of flags, dancing, and singing, the performance epitomized Galway's world-famous atmosphere and charm.

The Green Fields of France - Finbar Furey and Christy Dignam

Alright, so this is technically cheating as the song was performed on Ireland's Late Late Show, rather than in concert, but it was still performed in front of a live audience, so that's good enough for us.

Finbar Furey and Christy Dignam teamed up in January 2017 to perform this tear-jerking rendition of Eric Bogle's Green Fields of France.

You could hear a pin drop as the two veteran singers belted out the famous anti-war song.

While every other performance on the list relies somewhat on a vibrant and interactive crowd, this stunning rendition is the exact opposite and achieves greatness through the silence of the audience.

What's your favorite Irish live music performance of all time? Let us know in the comments.