Emma Fogarty is rooting for Colin Farrell at the 2023 Oscars as the Irish actor continually shows his support for the epidermolysis bullosa (EB) charity DEBRA Ireland. 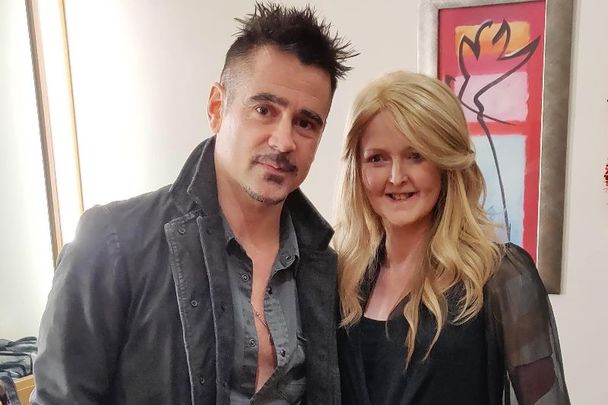 Emma Fogarty with Colin Farrell, just before the pair went on RTE's "The Late Late Show" in December 2018.

Emma Fogarty, a brave Irish woman battling a crippling skin disease, is backing her actor pal Colin Farrell to win an Academy Award for his role in "The Banshees of Inisherin."

Fogarty, 38, from Abbeyleix, Co Laois, was born with epidermolysis bullosa (EB), also known as Butterfly Skin, which causes her skin and internal body linings to blister. Nearly 80 percent of her body is covered in open wounds, which require fresh bandages every two days to prevent infection.

Fogarty, a patient ambassador for the nonprofit DEBRA Ireland, also happens to be close friends with Irish actor Colin Farrell, who recently won a Golden Globe for his performance in "The Banshees of Inisherin."

Farrell was at Fogarty's side when she appeared on RTE's "The Late Late Show" back in December 2018 as she revealed that her life is a constant battle against pain caused by the disease while raising funds for DEBRA Ireland.

"You're the most amazing person I've ever met," Farrell said to Fogarty during the appearance.

Later, in June 2020, Farrell completed a grueling 36km bike ride from his base in the US to support Fogarty's efforts to raise much-needed funds for DEBRA Ireland.

Meanwhile, Fogarty completed the same distance in her wheelchair along the roads at Abbeyleix, with the help of her assistant.

Hollywood star Colin Farrell has helped Emma Fogarty complete her 36km assisted walk to mark her 36th birthday by completing 36 miles on an exercise bike from his home in LA. Here he is post-cycle 💙 #Emmas36Challenge #cureEB To donate 👉 https://www.justgiving.com/fundraising/emma-fogarty

Fogarty has been Farrell's guest to a number of his film premieres, with the most recent being the Irish debut of "The Banshees of Inisherin" at The Lighthouse Cinema in Dublin in October.

Fogarty believes her pal Farrell is now a big favorite for an Oscar in March.

“I could not, not NOT be more proud of #ColinFarrell. This man is jaw-droppingly gifted. And more importantly, a wonderful friend,” she posted on Instagram after Farrell scooped the Best Actor Golden Globe.

“Loved the film. When I hugged & congratulated you after the #IrishPremiere I had a premonition that many awards were about to come your way.

“Now, I believe a truly well-deserved #Oscar is coming home to one of the greats of Irish Film & Drama.”

The 2023 Oscar nominations will be announced on Tuesday, January 24.