The Grammy-award winning singer is determined that his character will break from the trend and won’t be killed off from the award-winning show. 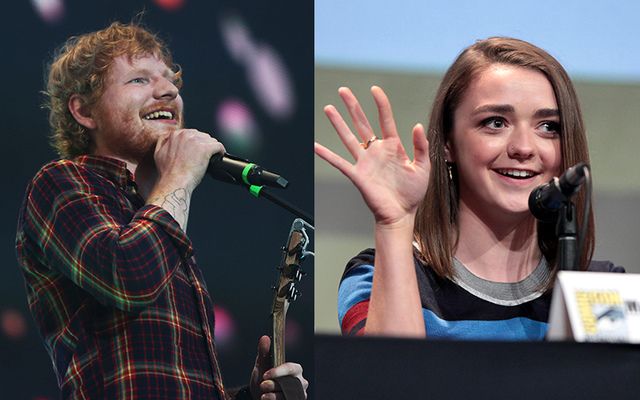 Many young girls have dreamed of having the world’s favorite crooner Ed Sheeran serenade them but the possibility of making that happen becomes all the more real when you can find the singer a cameo role on the hit TV show in which you star.

Maisie Williams, who plays the role of Arya Stark in HBO series Game of Thrones, is well known as a big music fan and among her favorites is redheaded singer-songwriter Sheeran, who recently revealed some details of his upcoming TV appearance.

While the seventh and penultimate season of the massively popular show has been kept completely under wraps, with nothing to be guessed from the previously released trailers, the “Shape of You” star confirmed the rumors that he was set to appear and has revealed he will feature alongside Williams during his brief stint on the fantasy show.

The show’s creators David Benioff and DB Weiss revealed in March that Sheeran was to appear after a campaign by Williams to have him feature. Sheeran will join the likes of Wilko Johnson (formerly of Dr. Feelgood), Gary Lightbody of Snow Patrol and Will Champion of Coldplay who have all previously made cameos.

“I just do a scene with Maisie,” the 26-year-old musician told The Hits Radio.

Sheeran is also pretty certain that he won’t meet the same fate as the vast majority of Game of Thrones characters: Death.

“I’d probably prefer to have sex than die in the show. I’m sure a lot of people are into that but I’m not.”

While Williams had been pushing for his cameo, Sheeran had also decided himself back in 2012 that he’d love a spot in the cast.

"My friend [Gary Lightbody] guested in it in 2012 and I remember I was on tour with him and he was like: ‘Right, I’ve got a guest slot on Game Of Thrones.’ I remember saying: ‘You got to get me on it at some point.’

It’s not known yet whether Sheeran filmed his scene in Ireland or in one of the other main Game of Thrones filming locations but as he brings Ireland close to a standstill whenever he visits our shores, it seems certain that we would hear about it if he was spotted hanging out with the rest of the crew in the Emerald Isle.

Game of Thrones is set to return to our screens this July 16 for its penultimate seven episodes.