Ed Sheeran’s tour now features an appearance from an Irishman for a duet with the man himself. 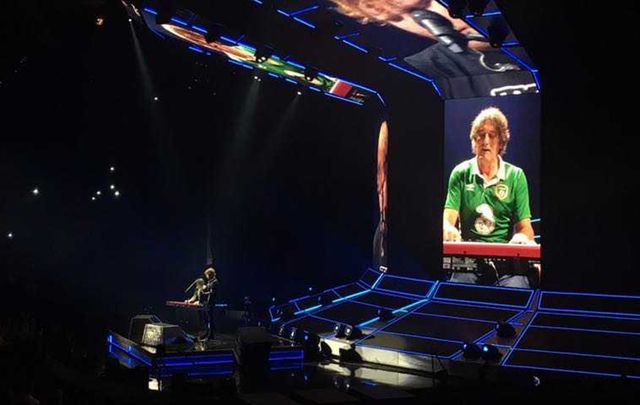 PJ Smith appearing in his Irish shirt with Ed Sheeran in Brooklyn.

PJ Smith is an Irish carpenter on Ed Sheeran’s tour who has found himself taking to the stage every night to play for the English singer.

Irishman PJ Smith may have signed onto the Ed Sheeran world tour as a carpenter but after the English singer discovered his musical talents, he’s been coaxed onto the stage to help out the pop superstar on a piano-based song.

With hundreds of thousands of Sheeran fans turning out over the next few months to see their favorite red-headed minstrel play all of his hits, some fans of the song “How Would You Feel” could have been disappointed by the its absence from Ed Sheeran’s setlist if it wasn't for Smith stepping in to take to the keys.

Addressing an adoring crowd on his tour in Duluth, Minnesota, last August, Sheeran explained that the track from his third studio album “Divide” is a tough one to include on the setlist as he himself cannot play the piano very well, preferring to stick with his trusty guitar and loop pedal.

Once he discovered that Smith, who he says has worked with him on his tours for a long time, is quite an accomplished piano player, the singer with Irish roots convinced the Irishman to join him on the stage once a night and show off his own musical skills.

Forever repping his homeland, Smith wears an Irish soccer jersey as he takes to the stage and wows the crowd alongside Sheeran with their duet.

Not only can he be seen in the video above in Minnesota but he also reappeared in the Barclay’s Center in Brooklyn this week where Sheeran is playing a massive four nights. Of course, there were plenty of Irish in the New York audience who were delighted to see the Irish carpenter representing the Irish in front of such massive audiences.

We’re sure fans will only be delighted if Smith appears on the next Irish leg of the tour when Sheeran returns once more to Cork, Galway, Belfast, and Dublin in summer 2018.

PJ Smith appearing in his Irish shirt with Ed Sheeran in Brooklyn.