Fox presenter Kimberly Guilfoyle, the daughter of an Irish immigrant, has attended her first official White House event as Don Jr.’s girlfriend, receiving the seal of approval from President Trump. 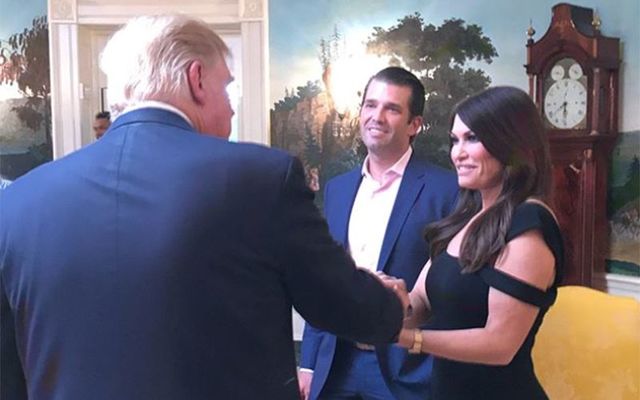 Donald Trump Jr. and Kimberly Guilfoyle spent Fourth of July together in the White House.

Just two weeks after officially confirming their relationship while Donald Trump Jr. was stumping in Montana, he and Fox presenter Kimberly Guilfoyle spent their first July 4th together in the White House, Guilfoyle’s first official Oval Office event as the First Son’s girlfriend.

The couple headed to the White House for the official Fourth of July event, meeting with veterans and with the President before enjoying the fireworks.

Trump and Guilfoyle had previously appeared in Montana together as Trump was to speak at the state's Republican convention in support of Senate candidate Matt Rosendale.

A very Happy 4th of July to everyone! It was great meeting all the veterans and active duty service members visiting the White House! Today is America’s birthday, and we are making it GREAT again! #fourthofjuly #weekend #usa

This is the first official visit to 1600 Pennsylvania Avenue, however, with 49-year-old Guilfoyle receiving a hearty handshake from Trump Senior.

“It was great meeting all the veterans and active duty service members visiting the White House! Today is America’s birthday, and we are making it GREAT again! #fourthofjuly #weekend #usa.”

Guilfoyle also took to Instagram to say, “An incredible afternoon at the White House! Thankful and proud to be an American! God bless all our troops & God keep our nation safe. Happy Independence Day.”

Twice divorced Guilfoyle had been linked to Don Jr. for several months following the eldest First Son’s split from his wife in March 2018. While the pair was spotted together following President Trump’s State of the Union address in January 2018, which Guilfoyle was covering for Fox, the relationship is believed to have started after Don’s estranged wife Vanessa filed for divorce. Since the split, it has been revealed that Don Jr. had an affair with Aubrey O’Day.

An incredible afternoon at the White House! Thankful and proud to be an American! God bless all our troops & God keep our nation safe. Happy Independence Day 🇺🇸❤️💃🏾@donaldjtrumpjr

Guilfoyle also has an 11-year-old son named Ronan from her second marriage to Eric Villency, the CEO of a design firm. She was previously married to Gavin Newsom, a Democrat and California’s Lieutenant Governor.

Amazing weekend in Montana with @donaldjtrumpjr here are some shots from our trip to the Stillwater River which we floated for the day on Saturday. 🇺🇸🇺🇸🇺🇸 #flyfishing #fishing #weekend #outdoors #montana

How did you spend the Fourth of July? Let us know in the comments section, below.