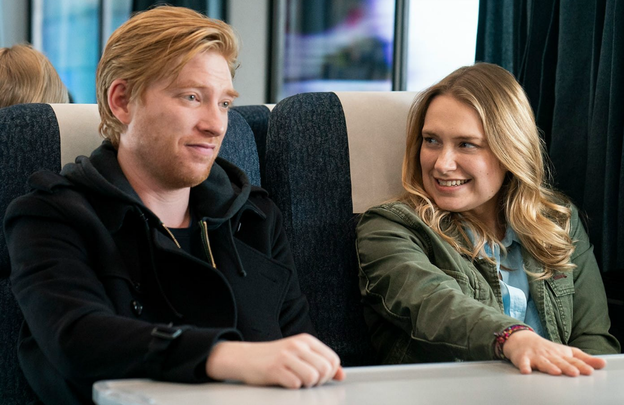 Run, the recently concluded HBO series co-created by Phoebe Waller-Bridge and co-starring Domhnall Gleeson has slowed to a full stop, as HBO announced last week that the first season of the show is also its last.

The cancellation is the first setback in Waller-Bridge’s on-fire career – she’s the creator and star of the hysterical, multi-award-winning Fleabag on Amazon Prime, and the head writer for the popular Killing Eve on BBC America.

Given its connections to Phoebe, 34, Run was a hot property when networks vied to secure rights, and HBO’s deep pockets won the day.  The show, starring Gleeson and Merritt Wever, was neatly summed up by the network: "Ruby Richardson walks away from her ordinary life in the suburbs to revisit her past with her college boyfriend, Billy Johnson.

"The two made a pact 17 years earlier: If either one of them texted the word RUN and the other replied with the same, they would drop everything and meet in Grand Central Terminal and travel across America together."

The show was actually created by Phoebe’s usual collaborator Vicky Jones.  PW-B exec produced and also had a cameo role.  The seven episodes in season one were good, not great, and Dubliner Gleeson – a Star Wars star and son of Brendan – acquitted himself just fine as the male lead.

"After exploring potential ways of continuing Ruby and Billy's journey, together with showrunner Vicky Jones, we have come to the decision that we will not be moving forward with a second season of Run," HBO said in a statement Friday.

The Hollywood Reporter said the creators and HBO tried to find a way forward, but couldn’t reach a deal. “Sources note HBO executives and Jones, who was optimistic for a second season, made several attempts to find a path forward for Run but ultimately couldn't come to an agreement,” the publication noted.

Don’t fear for all the principals, especially Gleeson. He’s been seeing out the pandemic at home in Dublin and has plenty of irons in the fire, including his co-starring voiceover in Peter Rabbit 2: The Runaway, alongside James Corden, Margot Robbie and Rose Byrne.  It’s due for release in January of 2021 – we hope.

Read more: Irish psychological drama “Blood” hailed as the next “The Killing”