Picking up right where they left off, Derry Girls received rave reviews for its season two premiere last night in Ireland. 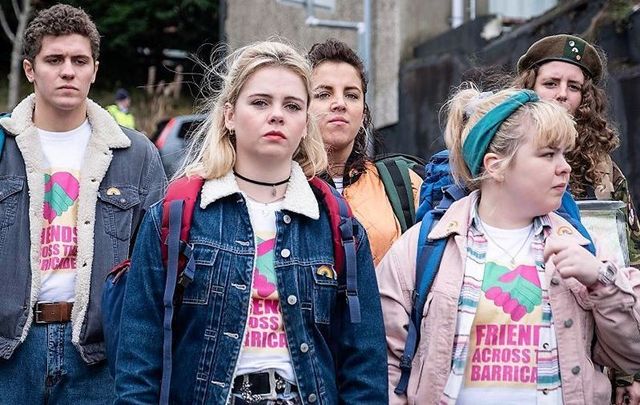 Derry Girls shows no signs of a sophomore slump IMDB

Derry Girls season two premiered in Ireland last night much to the delight of the show's dedicated fans.

In the premiere episode ‘Across the Barricade,’ 'Derry Girls' again dives headfirst into a hallmark of The Troubles era in Northern Ireland - the effort to bring Catholics and Protestants together.

The episode features the mundane, yet hilarious, “differences” between Catholics and Protestants, such as “Protestants hate ABBA,” and that Protestants keep their toasters in a cupboard. Catholics, of course, go to Bundoran and "love JFK."

The episode also sees the gang get in touch with nature, and features one hilarious scene of Clare, played by Nicola Coughlan, abseiling a cliff. On Twitter, Coughlan claimed Derry Girls creator Lisa McGee “tried to murder” her:

Picking up right where it left off, the 'Derry Girls' premiere episode received rave reviews and ushered a massive audience of nearly 2 million viewers.

STALL THE BALL!!!  Smash hit comedy #DerryGirls returned to @Channel4 last night with an average 1.8m people tuning in! It was the biggest programme for 16-34 year olds, winning the slot with a 21.4% share. pic.twitter.com/qCyr1H7jnv

The show's stars were quick to thank fans for the support.

We had serious craic filiming with our prods , thank you to everyone for all your lovely messages ☘️路‍♀️‍♀️臘‍♀️‍♀️‍♂️☘️ pic.twitter.com/D81DRxDZKC

So glad everyone like it! thanks for the support ❤️

You’re all amazing, thank you so much and goodnight ❤️❤️❤️❤️❤️ pic.twitter.com/md8dhuJ0Ny

And Siobhan McSweeney, who plays Sister Michael, shared that she may have celebrated a bit too hard:

“If you see anything that doesn’t look right..”Woman beside me on the train looks over at meShe has a point The head on me,lads 勞Too much celebrating over the absolutely kind and positive responses to #derrygirls #SisterMichael last night. Over 1.8 MILLION people tuned in. pic.twitter.com/lIB0vriIIj

Fans also took to Twitter to show their love for the return of Derry Girls:

The first episode of the new season of #DerryGirls was absolute perfection, even the music was epic. "Protestants hate ABBA" 

Seeing all this love for #DerryGirls is genuinely making me feel a new emotion I’d never experienced; I think I’m pr... proud? of being from... Northern Ireland?

Derry Girls is so good and pure. I want it to run forever and generate a dozen spin-offs. I want the cast to take over reading the news and weather and the voice on my satnav.

Catching up with #DerryGirls and I’m howling with laughter. Such a wonderful series

And, of course, global viewers continue to wait with bated breath for the second season to arrive on local Netflix services:

HELLO @netflix STOP IGNORING ME WHEN IS #DERRYGIRLS S2 ON IN THE US?!?!? pic.twitter.com/XOsQXRI16H

I’ve so much #DerryGirls FOMO
Praying for a @Netflix_CA air date countdown.
In the name of the father,l and of the son and of the sister Michael pic.twitter.com/gyGzTUJCx0

Did you watch the premiere of the second season of Derry Girls? Share your thoughts in the comments!