Pop sensation posts Instagram snap supporting MMA star saying “its about how you get back up”. 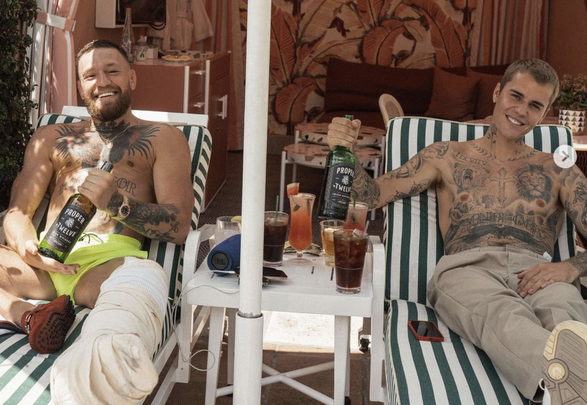 "The Biebs" and "The Notorious" Irish fighter enjoy a "breakfast of champions" as McGregor recovered following Dustin Poirier defeat.

Justin Bieber posted a photo to Instagram of the "Friends" singer and Dublin MMA fighter Conor McGregor chilling out with some Proper 12 Irish whiskey on Friday. His post read "breakfast of champions" and Bieber added “its about how you get back up”.

McGregor is sporting a full leg cast, following his defeat against Dustin Poirier early in July. The pair were photographed lounging in a cabana, at the Beverley Hills Hotel.

On his own Instagram account, McGregor posted the same photo with the caption "JB and Big Foot, we rule Beverly Hills! God bless my brother! Backed by the highest power!"

He added "Can't wait to get to the show tomorrow! Legends unite!"

TMZ pointed out that it seemed strange that Bieber was hanging out with McGregor seeing as "The Biebs" was one "tight" with the Irish fighter's nemesis, Floyd Mayweather.  However, Bieber had sent McGregor good vibes ahead of his UFC 264 fight and the MMA fighter responded with an Instagram live.

It seems stranger still that Bieber who's openly discussed his addiction to drugs and alcohol seemed to be promoting McGregor's Irish whiskey brand, Proper 12, in the Instagram post. However, according to the Daily Mail, he said been seeing, recently, enjoying things in moderation.