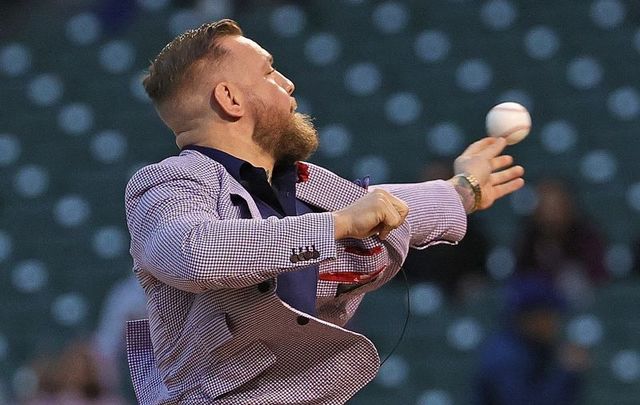 September 21, 2021: Conor McGregor throws out a ceremonial first pitch before the Chicago Cubs take on the Minnesota Twins at Wrigley Field in Chicago, Illinois. Getty Images

Conor McGregor was, naturally, impressed with himself and his "devastating" first pitch during his first-ever visit to a baseball stadium.

The Irish MMA star lobbed the ceremonial first pitch at Wrigley Field in Chicago ahead of the Chicago Cubs - Minnesota Twins game on Tuesday night:

“The most devastating first pitch ever seen in the iconic Wrigley Field!" McGregor told Marquee Sports Network afterward with a big laugh.

The reporter, Elise Menaker, responded: “I say this pitch is a little high, you say it’s perfect.”

McGregor said: "Well the venom is there, the power is there, it’s a little off accurate-wise, but ya know, I’m on the one leg, you can see me based fully on the left leg that was just recently injured.

He added: “I don’t think there was much power difference between mine and them out there [the MLB players]. Just the accuracy is a little off.”

“Just a little off,” Menaker agreed.

“It was either lob it friendly or aim to take him off his feet. And if that was on target, we’d have a problem I’d say.”

Conor McGregor (@TheNotoriousMMA) on his first pitch: "The most devastating first pitch ever seen! The venom is there, the power is there." pic.twitter.com/GTZQDqUbeU

“No, but I love it here, I have to say. I’m after bringing the family, it’s our first baseball game. To come here, to see the Chicago Cubs here at this iconic stadium, very, very happy with it, very proud.”

McGregor says he wants to come back and wants to do it again when his leg is fully healed.

“That wasn’t bad for my first one! I’m happy with that. It was a little high but that guy that was catching the ball was lucky it was high!”

Not shying away after his “devastating first pitch,” McGregor treated attendees to a rendition of ‘Take Me Out to the Ballgame’ - which was met with some boos.

Conor Mcgregor singing take me out to the ballgame at Wrigley Field. Enjoy. pic.twitter.com/4ijcvRPNNw