The Notorious has become the latest social media meme sensation. 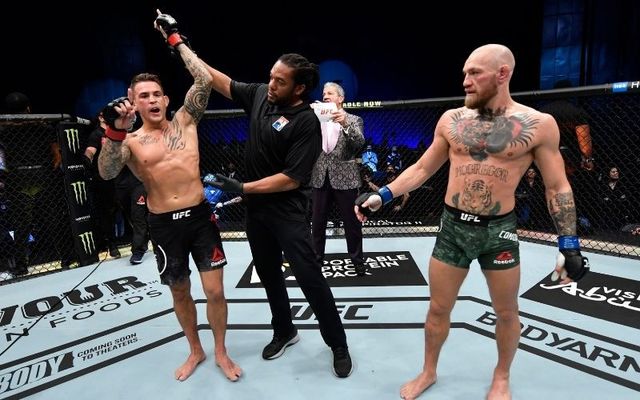 Conor McGregor was relentlessly trolled by social media fight fans following his lightweight defeat to Dustin Poirier at UFC257 in the early hours of Sunday morning.

McGregor had promised a 60-second knockout at Fight Island in Abu Dhabi but was instead defeated via TKO in the second round as Poirier landed a barrage of punches.

Fight fans were quick to revel in McGregor's failure and posted a flurry of memes celebrating his defeat. Many social media users posting edited shots of McGregor lying stricken on the canvas with a swollen face shortly after the fight, photoshopping the Notorious into a number of comical scenarios.

One Twitter user, for instance, posted a picture of McGregor in a hospital bed alongside the viral image of Bernie Sanders from Joe Biden's inauguration.

"Get well soon," the caption read, making it look as though Sanders was tending to a sick patient.

Another fan recreated an iconic scene from the Lion King by posting the image of McGregor on the canvas alongside Simba shortly after his father is killed, while another tweet placed the fallen fighter underneath a baby's blanket.

McGregor vowed to "do it again" with Poirier following Sunday morning's defeat. Both fighters have now beaten each other once after McGregor mauled the American fighter in 106 seconds in 2014.

The 32-year-old Dublin fighter was magnanimous in defeat, heaping praise on his opponent who he said fought "a hell of a fight".

The Notorious said that he was happy for Poirier and blamed his defeat on his failure to stop leg kicks.

"'It's heartbreaking, it's hard to take, he said shortly after the fight. "My leg is completely dead - even though I felt like I was checking them I was badly compromised. It is like an American football in my suit at the minute."